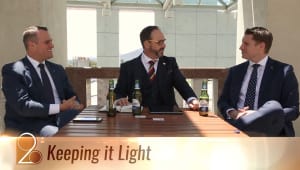 Update 1pm: Coopers has denied any involvement in the controversial Keeping it Light content series launched by The Bible Society last week.

It has emerged that Coopers previously published a statement in support of the content series calling it " a light hearted but balanced debate about an important topic within Australia. As a mature community it's a debate we need to have but in a good spirited and good natured way. That's how we've done business for a 154 years."

The statement was being tweeted several hours before the current statement which denies any involvement and is pinned to the top of its Twitter feed. It is still not clear whether Coopers was involved or not and why it made this apparent u-turn. The brewer is uncontactable due to a public holiday.

In the video Liberal MPs Andrew Hastie, who is a straight conservative Christian and Tim Wilson, who is gay and not religious, discuss the “heavy” issue of marriage equality, while drinking Coopers Light.

The alignment was seen by many as Coopers coming out against marriage equality. It met an online backlash calling for a boycott of Coopers and its products.

Yesterday, Coopers issued a statement denying any connection to the video and claims it did not give its permission for its beers to feature in the content series. It says it is not promoting a religious message and “embraces all of [its] beer drinking community”. However it does not overtly state it supports marriage equality.

“We want you to know that Coopers did not give permission for our Premium Light beer to feature in, or ‘sponsor’ the Bible Society’s ‘Keeping it Light’ video featuring Andrew Hastie and Tim Wilson.

“We respect the beliefs of our community and do not wish to try and change them. Our family brewery is made up of individuals from a number of different backgrounds, all of whom hold differing views on politics and religion, which we think is reflective of the wider community. We would like all Coopers fans to know that we support and embrace all of our beer drinking community.”

It's not clear whether the videos were produced in-house by The Bible Society or by an external agency. The video was the first in what was planned to be a six-part series. It's not known if they will still go ahead.

On the Keeping It Light website within The Bible Society’s site it claims the series is part of a “creative campaign” for which is has “teamed up with” Coopers.

The site says: “Australia’s national conversation has become fraught with shallowness and contempt for those who have a differing opinion. From yelling matches on ABC’s Q&A to screed on Twitter, we just don’t seem to be able to talk anymore. And the more important the topic, the less we actually hear each other.

“To speak into this, Bible Society Australia has teamed up with Coopers Premium Light to ask Australians to try “Keeping it Light” - a creative campaign to reach even more Australians with god's word - and this time we're doing so in a rather unexpected way.

“As part of this partnership Bible Society Australia has accepted a Bicentenary tribute from Coopers Brewery to produce a Bicentenary limited edition Premium Light beer and we’ve also hosted some light discussions on the heaviest topics. Starting with the topic of same-sex marriage.”

The Coopers Foundation, its charitable arm, does however support Christian values. Its website states: “The Foundation aims to improve and protect the quality of life of Australians by providing support to charitable organisations with recognised strengths in medical research and health care, in youth education, and aged care, and in fostering family and community support, based on Christian values.”

AdNews has contacted The Bible Society and Coopers for comment.