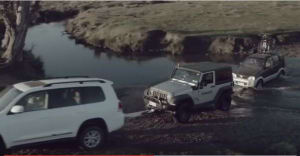 A complaint against the latest Toyota land cruiser ad showing “unsafe activity” has been upheld by the Advertising Bureau Standards (ASB).

The ad is referred to as a “frontier adventure story” and depicts a range of tasks from off road driving, towing a broken down vehicle and plane, transporting livestock and assisting people in difficult situations.

One of the situations involves the towing of a car from “flood waters”, prompting a complaint that the Landcruiser is being portrayed as a rescue vehicle.

The complaint accuses the advertisement of contravening the Queensland State Government safety message of, “If it’s flooded, forget it!”

“This ad is in direct conflict with government message that are trying to promote safety in flood water by reinforcing that it does not matter which car you drive flood-water is unsafe,” says the complainant.

“People die every year from this unsafe activity and it is highly irresponsible to have a major company promoting unsafe behaviour."

Toyota responded saying the scene depicts a rural setting and only shallow water is crossed, with the water level never rising above the lower portion of the vehicle’s tyres.

“Toyota contends that there is a significant difference between the scenario depicted and one which portrays or encourages dangerous driving in severe flood condition,” says the car brand.

While the ASB took the water level into consideration, and admitted it recently dismissed a similar complaint against Volkswagen where the driver pauses as he crosses a river to tell a canoeist about his vehicle, it upheld the complaint for breaching community standards.

“The board noted the Queensland government is raising awareness of the dangers of floods to drivers and considered that there was significant community concern around this issue,” the ASB says in its determination.

“The board noted that the level of the water does not meet the vehicle’s wheel arches but considered it was not clear whether the water level was rising or not and that the fact the man had been stranded on a fence would suggest that the water levels had risen suddenly and caught him unaware.”

In response, Toyota says it does not agree with the board’s conclusion but accepts the decision.

“We anticipate that we may wish to modify the final scene so that we can rebroadcast the Advertisement in the future," says Toyota.