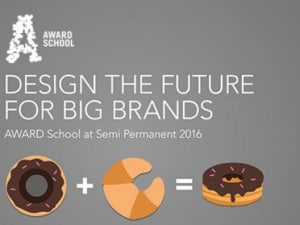 The CommsCouncil Design the Future at Semi Permanent

The Communications Council is attempting to tackle the lack of diversity in the Australian advertising market with a hackathon-style creative competition at the upcoming Semi Permanent design festival.

It will hold a one-day pop-up event under the AWARD School banner that will see young creatives work on a live client brief that champions diversity.

Three creative agencies and their clients have come on board to host the creative competition at the one-day pop up on Saturday 28 May.

Whybin\TBWA and ANZ bank, Saatchi & Saatchi and Toyota and BMF and MLA have signed up to be part of the project. Each of the client and agency teams are currently working on creative brief around diversity that will challenge young creative talent.

Entrants will be invited to register their interest ahead of time to receive the brief and then they have two weeks to submit a creative concept. A judging panel from AWARD School, ANZ, Toyota, Meat & Livestock Australia, Whybin\TBWA, Saatchi & Saatchi, and BMF will pick the finalists.

On the day 15 finalists will each tackle one of the three live briefs and will work with mentors from the agency creative teams to produce a final outdoor ad. There will be one winning team announced for each of the three briefs with a place at AWARD School up for grabs.

Tony Hale, CEO of The CommsCouncil tells AdNews the aim is help three of Australia’s biggest brands champion diversity across their businesses, brands and products.

It’s also hoped that the creative competition helps make a career in creative appealing to a more diverse demographic.

When asked how it will push the diversity agenda in terms of the teams or creatives that take part Hale said: “I imagine we’ll get a diverse spread of people applying but we don’t have any quotas for female or multicultural applicants. We don’t think that’s the right way to do it.”

Grassroots action is where Hale is focussing CommsCouncil's effort on diversity in the industry, whether it’s ethnicity or gender. “If the diversity brief is done properly, it should only be about the strength of the creative thinking, but we need to ensure that we get a diverse range of people talking about it … if you get people talking you’ll see that grassroots starts getting traction.”

He adds that the pop-up is just one approach, and says there are a number of initiatives going on “under the radar”.

“The best creative work has always been born out of diverse backgrounds and experiences. Through offering the three winners scholarships to AWARD School 2017, we are able to provide future creatives from every walk of life the opportunity to embark on the first step of their future careers.”

Key timings are as follows:

There’s more information about how to get involved in the pop-up via the Communications Council and AWARD School online.