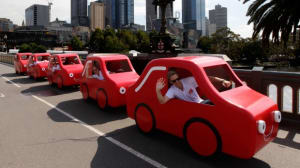 Coles is spending more advertising dollars on its insurance and financial services business as it diversifies away from groceries, marketing monitoring analytics platform Big Datr has revealed.

It has allocated 8.8% of its spend to 'If you're 30 and over' car insurance campaign compared to 5.0% on its top supermaket campaign.

The graph below illustrates where Coles spends its advertising budget.

Woolworths’ advertising has focused more on groceries, including specials and discounts to shoppers, in a bid to drive footfall.

Big Datr co-founder Avrill D’Costa told AdNews that Woolworths has outpaced Coles in supermarket advertising because of Coles' focus on the banking, finance and insurance industries.

“Banking, finance and insurance industries are very lucrative and provide long-term recurring revenue streams for a retailer that is driven by short-term sales, high volume and low price points to be profitable,” D’Costa says.

Despite German supermarket Aldi’s efforts to gain market share, it only accounted for 11% of the total share of voice in advertising between April 2015 and March 2016. However, it has overtaken IGA, which accounted for 6.45% of advertising over the same period.

Last week, Mumbrella revealed Coles had reduced the amount it spends on advertising from an estimated $200,000 per week to below $50,000 this year. Newspaper and magazine spend has reduced to less than a tenth of 2015 spending, thus far.

Media agencies across most of the major advertising groups are pitching for the Coles account this week, which is currently held by UM. It is believed Coles is split into five separate business units: Coles supermarket, Coles online, Coles Liquor, Coles Express and Coles financial services.