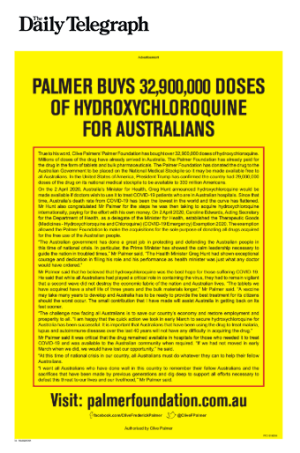 Mining mogul and businessman Clive Palmer has taken out three full-page ads in News Corp publications to promote his foundation's move to source hydroxychloroquine as a possible cure for COVID-19.

The Palmer Foundation has taken out ads in the Daily Telegraph, the Courier Mail and Herald Sun to promote its purchase of hydroxychloroquine, a drug used to treat and prevent malaria, which it claims shows "enormous promise" in curing the virus.

The ads appear in Palmer's signature yellow made famous during his political campaign last year.

One ad says the foundation has purchased 32.9 million doses of the drug following health minister Greg Hunt announcing that it could be trialled at the beginning of April.

The ad also tries to link the use of the drug to Australia's decline in cases as it flattens the curve. However, recent reports on the trials underway say hydroxychloroquine is yet to show benefits to coronavirus patients.

Palmer has been championing the use of the drug since last month before it was approved for use in Australia as a possible treatment for coronavirus taking out ads on Facebook and in News Corp-owned national newspaper The Australian.

Announcing his foundation - with the approval of the Australian government - has gone out & raided global supplies of hydroxychloroquine.