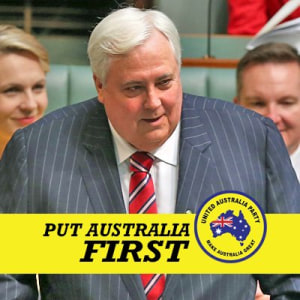 Australian businessman and politician Clive Palmer has left many Australians frustrated after blasting out 'unsolicited' text messages advertising his return to politics.

Palmer, who in 2013 created the Palmer United Party and won the Sunshine Coast seat of Fairfax that same year, is returning to politics after de-registering the party in 2017 after serving one term as an MP.

In 2018, he revealed his return to Federal politics, with the revival of his party under the new name, the United Australia Party.

Over the weekend, Australian mobile users, including three at AdNews, were left baffled after receiving unsolicited text messages spruiking the party and its plans for the nation.

With no unsubscribe option, it appears that each message was geo-targeted, with users nationwide each receiving messages about plans for their relevant state.

However, one message, received by one member of AdNews, incorrectly targeted them as inhabitants of the state of Victoria.

"Make Australia great. Fast trains from Melbourne. One hour to CBD from up to 300km away. Vote 1 United Australia Party, Clive Palmer," the message read.

The same message was sent to those living in NSW as well. Other examples included messages regarding reliable energy in South Australia and promises of 20% less tax in Tasmania.

According to Australia's Electoral Act, the move by Palmer was completely legal, despite his party not reaching out to voters for permission prior.

With many Australian's left fuming over the stunt, some took to Twitter, urging those who received the messages to complain to Australian Communications and Media Authority (ACMA).

The stunt has also brought into question the laws governing personal information and political advertising, as many claimed they were unaware that this level of marketing was allowed, liking it to a "Trump-like invasion of data privacy".

This is not the first time Palmer has caused a stir with his political advertising. In July last year, vandals repeatedly targeted the Australian businessman's 'Make Australia Great' billboards.

Palmer is also locked in a legal stoush with American rock band Twisted Sister, which is pursuing legal action against the politician over his use of their song ‘We’re Not Gonna Take It’ in political campaign ads.

Despite the backlash, Palmer has been quiet across his social media accounts, AdNews has also contacted the United Australia Party for comment.

How is clive palmer allowed to send texts to people with political messages?

Clive Palmer is sending out spam texts. Where is the opt-out link?!! I am fed up with this coal billionaire believing he can badger us into becoming PM so he can fight action on climate change. Pay your workers their entitlement Clive!#clivepalmer #uap #fightfascism

How did I get a text message from the Clive Palmer party? 🤔 and the authorisation page is v v broken pic.twitter.com/JiLPCIJIXa