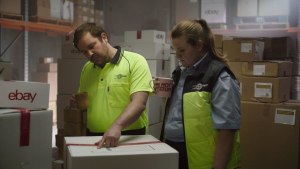 CHE Proximity has released Posties, its first work for eBay since being appointed creative agency earlier in the year.

eBay is the country’s most visited online shopping site, with two out of three Aussies having made purchases within the last twelve months. This adds up to lots of deliveries across the nation.

In the new platform, CHE Proximity decided to shine a light on the delivery room and the people that have more insight into Australians' online shopping habits than anyone else: posties.

The two films go behind the curtain and take a look at the day-to-day life of posties; the tea break banter, the predicaments they find themselves in when out and about making deliveries, and of course, who’s ordered what and for how much.

A third film will be released in the lead up to Christmas.

“We all know that Aussies love a bargain and hate to feel ripped off," CHE Proximity chief creative officer Ant White says.

"This campaign reminds us that eBay is the undisputed one-stop shop for everything Australia wants and needs, every day - and at some of the best prices.”

The light hearted films were directed by Tony Rogers from Guilty.

The TVCs will roll out until Christmas and will be accompanied by radio, OOH and social.

“The humble Aussie posties remain neutral in the online retail war. Although unbiased, they know everything about the nation’s shopping habits, with millions of parcels passing through their dexterous fingers daily," CHE Proximity Sydney executive creative director Wesley Hawes says.

"This new platform from eBay shows us what really goes on behind-the-scenes.”

eBay is the latest account win for the agency. This year it has also picked up the creative accounts for IKEA, Aussie Home Loans and flybuys.