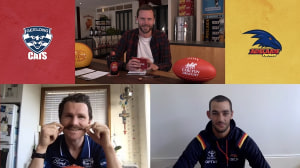 Carlton & United Breweries is expanding into broadcasting with a show to help footy fans get through the coronavirus lockout.

The show is produced by CUB’s in-house agency Cubhouse, filmed entirely on Zoom and beamed direct from the “Carlton Draught iso bunker” to Facebook.

It is hosted by comedian Dave Thornton and gives footy fans a glimpse into the private world of AFL stars to see firsthand how they are coping away from the game.

Players go head-to-head with a series of questions and challenges over four rounds on the show, which is uploaded every Friday. The winner takes home a Carlton Draught golden pint trophy plus 10 kegs to donate to their local pub for when they re-open.

Adelaide star Tex Walker said: “This was a great show to be on. Carlton Draught knows how to have some fun - going to be hard to beat!”

CUB’s head of content Jonathon Bernard said Home Game is like Jimmy Fallon meets Whose Line Is It Anyway with a sprinkle of Carpool Karaoke:

“Everyone is suffering from cabin fever, and for players that’s translating to white line fever. They want to get back on the ground. We opened the doors to our favourite stars’ homes for some real behind the scenes play.

“With production largely happening through Zoom, the only difficulty has been helping Jonathan Brown download a green screen background.”

Carlton Draught Brand Manager Stephen McWilliams said the show is the latest venture in CUB and the AFL’s decades-old partnership and is keeping fans engaged while play is on hold:

“After suspension of play, we missed our weekly dose of competition. Home Game hits the right note with both fans and players, with the bonus of helping out some local pubs.”

“Our first episode drew in 550,000 views, which was a great result for our in-house production team Cubhouse who created and pulled together the show in a matter of days.”