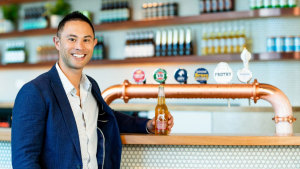 Phan has been part of CUB’s Marketing Leadership Team since joining from the Ford Motoring Company four years ago.

He will replace Alexander Lambrecht, who is leaving CUB to continue his career with AB InBev as their new VP, Marketing for India and South-East Asia.

“In our 150+ year history we have produced some of the Australia’s most iconic and enduring marketing campaigns, helping our brands become among the most recognisable in the country. VP Marketing is one of the most important roles in our business and there is no-one more suited to fill it than Brian," CUB CEO Peter Filipovic says.

“He has been critical in driving Great Northern’s growth to new heights and was behind the world-first launch of Corona Ligera, which is now Australia’s number one international mid-strength beer. In addition, he was instrumental in turning around CUB’s performance in the cider category via Pure Blonde Cider and Mercury Hard.”

Lambrecht's departure comes ahead of Asahi’s pending acquisition of CUB.

Filipovic praised Lambrecht's efforts while in the role, noting that during his time he energised the marketing team with his passion for creativity and drive to embrace new ways of how to "meaningfully connect with consumers".

“For me, being appointed to this job is a dream come true. Whether it’s VB, Great Northern, the Carlton family, or any one of CUB’s other fantastic brands, these are icons of Australian culture," Phan says.

"Consumers love the romance of these brands, their history and the fact that some of the most memorable moments of their lives have been enjoyed with one of our drinks in their hands. I really think this is the best marketing job in Australia.”