Snickers’ Aussie Builders Show Some ‘Respect’
In the Australian Snicker’s candid camera style commercial, we see the ‘You’re not yourself when you’re hungry’ portrayed across typical construction workers. Clemenger have comically delivered male construction workers on-site calling out to shocked yet flattered female passer-bys, with exaggerated politically correct statements such as; “I’d like to show you the respect you deserve!” or “I appreciate your appearance is just one aspect of who you are!”.

The amusing premise of the commercial with workers behaving unexpectedly, has received mixed responses on social media endorsements for the ad’s hilarity or suggesting the commercial both breaches and supports gender equality. This leads to the question of how effective was this cheeky execution in terms of influencing consumer behaviour?
How we do it?

To investigate this, Neuro-Insight measured brain activity to see how 50 females and 50 males respond to the ad. The specific technology used by Neuro-Insight is founded in work originally developed for academic and neuroscience research and has been used to analyse the effectiveness of Cannes award winners for over three years. The technology allows us to simultaneously record viewer’s second-by-second changes in approach (like)/withdraw (dislike), emotional intensity, engagement and memory whilst watching advertisements. The measure Neuro-Insight predominantly focus on is Long-Term Memory encoding or storage. This measure reveals what the brain is storing (or encoding) into conscious and unconscious long-term memory. Neuro-Insight’s Memory Encoding graph reveals how elements of the ad are stored in long-term memory. The higher the value, the more strongly that moment in the ad is stored in memory and the more likely it will influence consumer behaviour (*to dive deeper into Neuro-Insight and advertising effectiveness see section at end of article).

Snickers
Below is the time series graph of the male and female response to Snickers – Hungry Builder Ad. The red trace indicates the level of long-term memory encoding controlled by the left hemisphere where the left hemisphere is primarily responsible for storing the details of experiences including such things as dialogue and text. By contrast, the right hemisphere (blue trace) specializes for global features such as scenery, facial expression as well as music and the emotional dimension of the experience.

By viewing the different time series the differences in Memory encoding are clear. On average, the levels of long-term memory encoding for this ad in males is 35% greater than females. So overall, the narrative is being better encoded by males than females. A clue for the cause of this difference comes from a comparison of the average Approach/Withdraw measure for the males and females (below). While the males show a positive or approach response consistent with a humorous response to the ad, the females show a negative or withdraw response consistent with the experience of anxiety or fear.

The second-by-second approach/withdrawal graph (not shown here) illustrates sharp withdrawal responses for females at the instances in the narrative where construction workers call-out to the female passers-by. Corresponding with the peaks in withdrawal we see spikes in female viewer’s emotional intensity, this typically suggests that viewers are experiencing anxiety and in this particular execution it is not so far-fetched to see why. The creative toys with the notion that construction workers would usually call-out derogatory or uncomfortable remarks that might be expected to evoke feelings of anxiety. Thus while the explicit narrative is humorous with portrayals of exaggerated political correctness, the underlying context of male workers on a building site calling out to women appears to evoke feelings of anxiety or discomfort in a majority of women. Though there is an overall withdrawal response, there are still moments of the ad where female viewers respond positively. As highlighted below, we see a sharp rise in memory encoding as female viewers respond to the flattered and grateful passer-by.

In the female data, we see that Conceptual Closure extends into the final branding and thus we would judge this ad modestly effective. 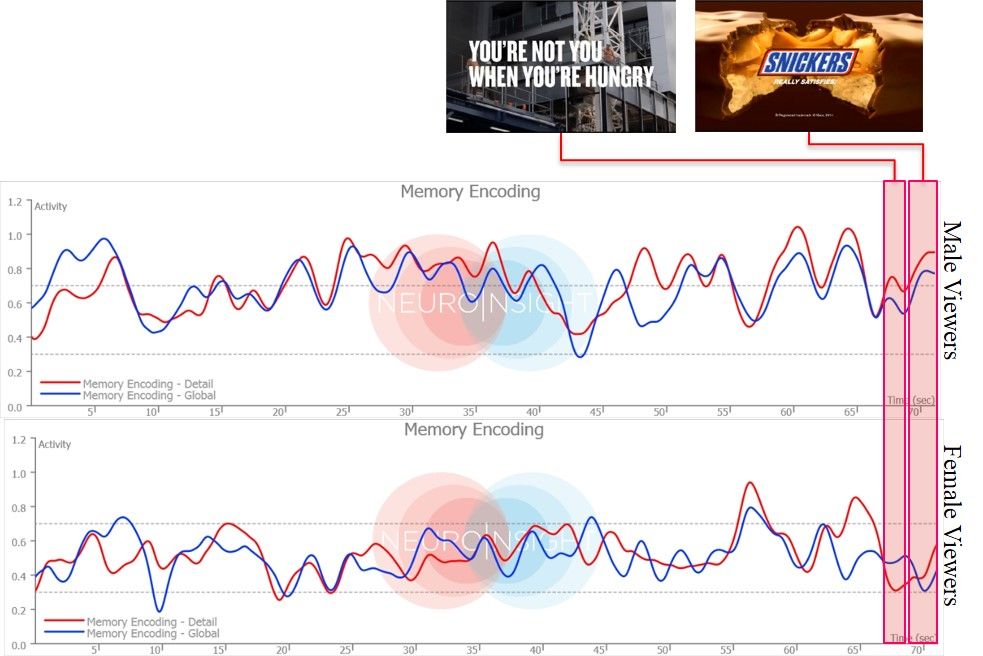 In summary, our data suggests that this advertisement is particularly effective with males and significantly less so with females. The males responded very positively to the explicit humorous intent with high levels of long-term memory encoding. By contrast, we suggest the less effective response in females is driven by the context of the advertisement that evokes feelings of discomfort and anxiety that reduce levels of long-term memory encoding.

Deeper Dive into Neuro-Insight
Research by Neuro-Insight as well as other consumer neuroscience researchers has shown that the level of long-term memory storage at the time of branding or key message in an advertisement is a powerful indicator of the ad’s effectiveness in terms of influencing consumer behaviour.

A case study based on the 2014 Cannes Creative Gold Lion illustrates the power of the link between Neuro-Insight’s long-term memory measure and advertising effectiveness. In June 2014, Neuro-Insight released an analysis of the Volvo ‘Epic Split’ advertisement. Readers are referred to  for the findings on this advertisement. The ad was most effective with males (hardly surprising) with extremely high levels of long-term memory encoding precisely 60sec into the advertisement when the sole piece of explicit branding and key message was delivered (98% percentile of Neuro-Insight advertising study database). On the basis of the Neuro-Insight results, we predicted the ad would be highly effective in terms of sales and brand awareness. Our prediction was born out when the Volvo campaign was awarded the 2015 Gold Lion for Advertising Effectiveness with truck sales increasing 34%. Of the advertisements in this campaign, the “Epic Spilt’ was considered the highlight.