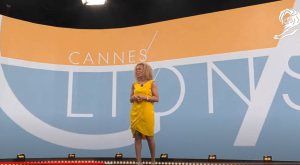 Cannes Lions announced its second day of winners in a live Awards Show in Cannes, France.

The Grand Prix went to ‘The Wish’, for Penny, by Serviceplan Germany Munich.

Film Craft Lions jury president, Patrick Milling-Smith, co-founder & global CEO of SMUGGLER, USA:  "Ultimately we awarded the Grand Prix to a film that is almost a throwback to classic filmmaking and had to be so perfectly crafted on every level to truly resonate and work.

"In the wrong hands a film like this could have been lost to over sentimentality, or victim to a few false notes, but it is in fact perfectly complete and the obvious work of a filmmaker in utter command of his craft."

From 661 entries received in the Digital Craft Lions, 21 Lions were awarded by the jury: 3 Gold,  7 Silver and 10 Bronze.

The Grand Prix was presented to, ‘Backup Ukraine’, by Virtue Worldwide, New York.

Digital Craft Lions jury president, Luciana Haguiara, executive creative director of Media.Monks, Brazil: “The Backup Ukraine project allows all the citizens from Ukraine to preserve their greatest wealth as a nation: their culture. Using a real-time smartphone camera and GPS, everyone can capture any place or monument in minutes and save the data as blueprints in the cloud to preserve it forever.

"And all of this, with their own phones. A project that turns every Ukrainian citizen into a guardian of their national heritage. Because culture is the identity of people and it can’t be destroyed.”

The first Grand Prix was won for Portugal. ‘Portuguese (Re)Constitution', for Penguin Books, by FCB Lisbon.

Design Lions jury president, Lisa Smith, executive creative director of Jones Knowles Ritchie (JKR), USA: “This year’s Grand Prix in Design shows the power of a simple idea — freedom, and the use of the most primitive medium to execute it — a pencil.

"We debated at length whether a publication should be a Grand Prix in an era where we have all the technology and innovation at our fingertips, but the symbolism of defacing a fascist constitution with poems using words selected from the historic document and illustrations covering the remaining ones was not only the highest form of craft and execution but sending a beautiful message of freedom of speech that many children in Portuguese schools will go on to learn for years to come.”

In the Entertainment Lions, 655 entries were received and 25 Lions awarded by the jury: 4 Gold, 7 Silver and 13 Bronze. The Grand Prix went to ‘Eat a Swede’ for the Swedish Food Federation, by McCANN Stockholm.

In the Entertainment Lions for Music, 390 entries were received and 17 Lions awarded: 4 Gold, 5 Silver and 7 Bronze. The Grand Prix was awarded to the Residente music video, ‘This Is Not America ft Ibeyi’, by Doomsday Entertainment, Los Angeles / Sony Music Latin, Miami, USA.

Entertainment Lions for Music jury president Amani Duncan, CEO of BBH, USA: “We awarded the Grand Prix to this piece of work, because of the video's undeniably stunning visuals and incredible production quality.

"While the video has a very distinct point of view that may not be shared by all, it is an extremely powerful statement on socio-economic and culture from an underserved community. Music has always been a key platform for protest songs throughout history and one that we all want to continue to see in years to come.”

Celebrating creativity that taps into fan culture and leverages the power of sports and eSports in connecting people to brands, the Entertainment for Sport Lions received 558 entries and 22 Lions were awarded by the jury: 3 Gold, 7 Silver and 11 Bronze. The Grand Prix went to ‘NikeSync’, for Nike by R/GA London.