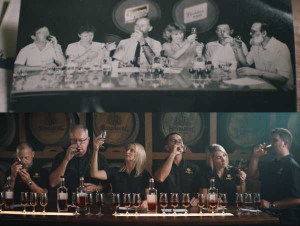 Bundaberg is celebrating the craft that goes into its rum in its latest campaign from Leo Burnett.

A series of four 15-second ads continues the 'Unmistakably Ours' brand positioning that launched almost a year ago.

Bundaberg is nearly 130 years old and each ad tells a story about part of its history. The Diageo-owned Australian rum is hoping to bring to life the stories behind how it's made and the people that make it.

The first ads aired on TV yesterday (4 March). The whole campaign was filmed at the Bundaberg Rum Distillery in Bundaberg, Queensland, and features real people who work at the distillery.

History tells the origins of Bundy rum, Awards opens up about the range of award-winning rums made under the Bundy brand, Locally sourced talks about what goes into the bottles focusing on home-grown sugar cane and the last ad Dark & Stormy shows Bundaberg Rum as the perfect complement to ginger beer.

“As Bundaberg Rum approaches its 130th year, we wanted to celebrate life at the Distillery – putting the spotlight on our people and award-wining product. Bundaberg Rum is made by a small group of just 34 people, with locally sourced ingredients. It has a unique and rich heritage of which we’re extremely proud. It’s a story we want to share with all Australians,” says Bundaberg Rum senior brand manager Karl Roche.

Vince Lagana, executive creative director at Leo Burnett Sydney, says: “We’re proud to say the ‘Unmistakably Ours’ campaign has seen significant growth for Bundaberg Rum and has brought strong brand values back to the brand. In these follow up 15 second product spots, we wanted to focus on all the great things that make this iconic liquid truly unique and in turn prove how it really is unmistakably ours,” says

Diageo dropped $20 million on the relaunch of Bundy  last year, as part of a planned five year purpose-led brand platform to grow the brand

It has been re-running the ads on TV for the past few weeks.