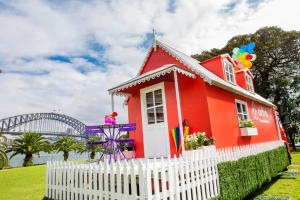 Southern Cross Austereo, Airbnb and CarsGuide are just some of the brands boosting their support of Sydney’s Mardi Gras this year.

Airbnb has launched its own unique Mardi Gras float called The Big Gay Stay. The float is custom-designed as a house with a loft-style master bedroom, fully equipped kitchen, garden with a white picket fence and neon lights.

The float will be located at the Royal Botanical Gardens, with one lucky couple winning the chance to call it home on 6 March. After the couple check out, the house will be transported to Sydney's Oxford Street where it will be a main feature in the Mardi Gras parade.

Speaking to AdNews last month Airbnb Australian country manager Sam McDonagh said the company were looking to boost its outdoor event sponsorship this year and that its major partnership of the Mardi Gras was part of its push.

“The LGBT community around the world have been some of the first users of Airbnb, hosting and travelling with pride, so we're thrilled to support a community that has always embraced us,” McDonagh said.

“I'm thrilled that the Mardi Gras is our second busiest booking period in the year, with guests from around the world discovering and booking accommodation with locals so they can be a part of the celebrations.”

2DayFM has also announced it is an official commercial radio partner of the Mardi Gras. As part of its support the station will be offering tickets to an exclusive viewing area to the parade sideshow as well as broadcasting Mardi Gras dedicated content for the festival. SCA has been an official partner before but this year will mark the first time it will have its own float in the Mardi Gras parade with Sydney breakfast show hosts Dan & Maz riding up front.

“Our involvement has increased year-on-year and we can't wait from the crescendo of breakfast duo Dan & Maz's very own float in this years' parade.

“Challenger brand” CarsGuide has also stepped up its involvement, partnering with Uber and the Aurora Group GLBT charity to launch its We Love Every Car campaign.

Using the Uber app, customers can enter the “MardiCar” promo come, giving them the option to request a free ride in one of three, decked out ‘CarsGuide MardiCars’, until 7 March.

CarsGuide.com.au head of marketing Glen Knowles said: “CarsGuide.com.au is the challenger brand in what has become a tired old market. We wanted to show there is a ‘better way’ and have some fun at the same time.”