BOYS DO CRY - Gus Worland, founder and director at Gotcha4Life 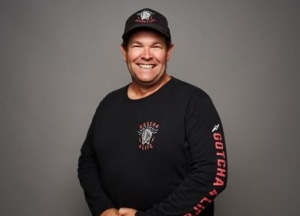 Men generally want to deal with stuff themselves. “She'll be right mate, give it to me, I'll deal with it.” It's a difficult thing to unlearn that. But that's why we've got this problem. My goal is to get Aussie men more mentally fit and keep it as simple as possible.

When was the last time you cried?

Tell us about your experience of traditional masculine stereotypes growing up.

I went to an all boys school, I had an older brother. My dad was old school in terms of never home, always at work. I grew up in a home that was traditional back in the '70s and '80s, where dad was the breadwinner and mum was the home maker. I grew up feeling that that was the way it's done.

What would you tell your 15 year old self about opening up and showing your emotions?

I always wore my heart on my sleeve, but even more so now I would tell 15 year old me that to be open, honest and vulnerable is ok. It sets you free and it also means that you surround yourself with likeminded people.

What do you want for the next generation?

To not worry alone. If they're not worrying alone, they're telling someone about how they truly feel.

What do we, as a society, need to do to challenge views that men should always put on a brave front?