Big Picture: The cult of SXSW 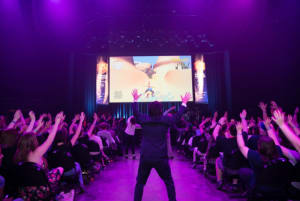 Hundreds of thousands of people are about to descend on Austin, Texas, for the mad 10 days that make up the South by South West festival. AdNews highlights the must-attend sessions, the top trends on the agenda being discussed and asks if SXSW is finally going to leave Cannes dead in the water?

What started out as a festival for the music industry has now morphed into a unmissable event in the agency and marketing calendar. South by South West (SXSW), especially the interactive stream, is littered with products, themes and sentiments that the industry is set to embrace over the coming year.

The festival has seen tech startups such as Meerkat, Foursquare and Twitter gain serious traction and over the years it's also seen the likes of Facebook’s Mark Zuckerberg, astrophysicist Dr Neil deGrasse Tyson, and Chelsea Clinton, all gracing the stage as keynote speakers.

In 2015 more than 100,000 people descended on Austin for all the events, conferences and trade shows, seeing more than [US] $317.2 million pumped into the city's economy. Each year more marketers and more Aussies touch down with more than 500 headed stateside this year. For managing director and ECD of VML Australia, Aden Hepburn, the conference speaks to a shift in the industry, which is why so many from adland locally brave the 23 hour journey to get a front row seat.

“From an advertising and marketing perspective, the industry doesn’t want to just make “ads” any more, everyone knows the world has changed,” he says. “So with SXSW being the new genesis of innovation and entrepreneurism, there is an abundance of startups, networking, inspiration, hands on education and creative and tech leaders all in one place. It's proving to be an amazing platform to influence the ideas creatives and marketers want to make.”

In 2013 former Telstra head of mediaAdam Good wrote for AdNews that SXSW is the new Cannes, forming his opinion around something that none other than Jeff Goodby, co-founder and co-chair of San Francisco agency Goodby, Silverstein and Partners said at the festival three years ago: "SXSW is about the future, Cannes is about the past,” adding that one is about success and the other failure. It appears though that both festivals seem to be evolving, with SXSW becoming more about the brands and Cannes embracing more technology than ever before.

It doesn't have to be an either or situation for today’s industry attendees. Julian Bell, managing partner for GPY&R, says there’s distinct points of difference between the two festivals.

“Cannes is largely dominated by the creative industries and marketing fraternity, who become a much smaller audience in SXSW where technology, startups, VC, medical and political communities dominate,” he says.

Adding that Cannes is a celebration of what has been recently created in the advertising world, hence there’s a retrospective element to it, whereas SXSW is more of a testing environment and launchpad for new ideas and technologies, which are then adopted and leveraged by marketers into their activity.

Bell notes that there appears to be a virtuous relationship between the two, saying that what first appears at SXSW could take out a Cannes Lion down the track.

Digital and social media manager for Sportsbet, Emilie Jirsch, believes that for the CMO of the future there’s no better place to be than SXSW.

“In the future the CMO will spend more on technology than the CIO. SXSW is the best place to hear, see and discuss future trends in the industry – it has provided our team with valuable networks of thought leaders in this space.”

Operations director for Leo Burnett Sydney, Jeremy de Villiers, agrees with Bell that the events are both very different, stating the obvious that Cannes is centred on an awards show and SXSW is not.

“SXSW covers technology, film and music, featuring a diverse range of speakers and topics. Our industry is changing so quickly and if you want to be inspired and informed around what is happening in technology, media, business and creativity, I would suggest going.”

While it doesn’t look like SXSW will take out Cannes any time soon, Bell does believe that what happens in Texas is becoming more important for marketers and creatives to take on board.

“It’s cliched, but what we see at SXSW is becoming adopted in the mainstream more and more quickly,” he says. “Creatives and marketers get a front row seat to tomorrows’ communication tools and platforms. When you smash that together with brand and marketing streams, you’ve got the recipe for the perfect conference.” 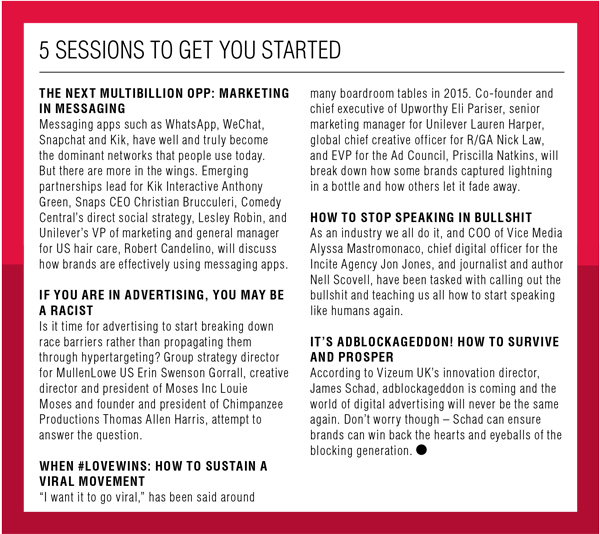 Augmented Reality and Virtual Reality are predicted to be the breakout technology of SXSW this year. There’s so much emphasis on AR and VR the tech even has its own track at this year’s interactive event.

Diversity in technology businesses will also be a big theme for SXSW in 2016. With several sessions being dedicated to the topic. The conference also introduced its first ever online harassment summit, to mitigate the backlash it received after it cancelled two controversial panels on harassment in gaming.

The self-driving car and the evolution of transportation system will be explored heavily at SXSW, with several sessions covering the topic. The US secretary of the Department of Transportation, Anthony Foxx, will even be taking the stage to talk about the rise of the connected city.

Politics and the role technology plays in realworld policy will also be a big at this years festival.

One catalyst for this is of course this year’s US presidential elections.