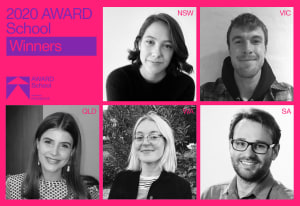 AWARD School has named its top students for 2020 in each state in a celebration of Australia’s brightest emerging creative talent.

This year’s winners were drawn from a national intake of 192 students.

This was the second year for AWARD School’s Regional and Indigenous Scholarship programs.

The five state winners are now in the running to be named National Top Student and will have their books reviewed by an international super jury.

The National Top Student will be announced on August 12.

Chair of AWARD and M&C Saatchi Chief Creative Officer Cam Blackley congratulated the winners and praised all the 2020 graduates for their hard work and commitment throughout one of the most challenging year’s in AWARD School’s 37 year history.

Blackley also thanked this year’s seven school heads, more than 50 lecturers, over 80 tutors, and in excess of 100 judges nationally, whose combined efforts make AWARD School not just possible but so hugely successful.

“When we started our enrolment campaign in January, we put the call out for hardcore thinkers to apply for this year’s AWARD School,” Blackley says.

“Little did we know back then what an insane year this would turn out to be, and in incredibly challenging circumstances this year’s students have delivered true hardcore thinking. It’s one of the strongest years in quite a while for depth and quality of talent.

“Several months ago when we realised that this was going to be a uniquely tough year just to get AWARD School off the ground, let alone make it a success, we were also determined to ensure that far from being the worst AWARD School year, 2020 would actually be one of our best years.

“And thanks to the incredible hard work of our amazing school heads, tutors and guest speakers, we reckon we met that objective."

National and NSW AWARD School co-heads Mandie van der Merwe and Jack Nunn say the commitment shown by their fellow school heads in each state as well as all tutors and the engagement from students around the country this year had been “beyond amazing”.

Numerous AWARD School ‘firsts’ were introduced this year, including the creation of the first AWARD School online community and social events to help students network while having to work from home.

Another first was the Legendary Lesson, in which 32 of advertising’s most legendary creatives from around the world dropped into tute sessions to give direct feedback on student’s work.

“It was a real feat for our team to assemble 32 of the planet’s top creatives to take part in this year’s course, and we cannot overstate how grateful we are to them," Blackley says.

“The fact that this number of our industry’s greats freely gave their time for the Legendary Lesson goes a long way in showing the respect AWARD School commands around the world."

This year also featured the AWARD School Mentor Program, designed to help students get job-ready and take the next step in their creative careers.

At the end of the course, tutors were asked to nominate students for the program based on their attitude, work ethic and overall improvement, not just their final portfolio.

This year 21 students were chosen and will be partnered with a senior creative and have four monthly catch-ups to help them develop.