Australia to force Google and Facebook to pay for news 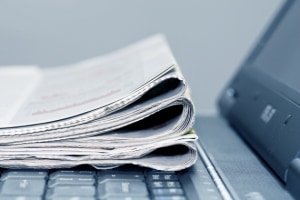 Australia is preparing to force giant platforms Google and Facebook to pay premium publishers for the use of their content.

The federal government in December told the digital giants to negotiate with publishers on the use of their content or face further regulation.

However, since then there has been "no meaningful progress" in talks between premium content publishers and the digital platforms on a voluntary code, says treasurer Josh Frydenberg.

The competition watchdog, the ACCC, which ran an inquiry into digital platforms, says there is “no expectation of any (agreement) even being made”.

"Australia will not be the first country that seeks to hold the digital giants to account and regulate payment for content," says Frydenberg, writing in The Australian newspaper in an article headed, Here’s news — we’ll hold Facebook and Google to account.

"It is only fair that the search ­engines and social media giants pay for the original news content that they use to drive traffic to their sites."

However, the federal governmnet has a hard road ahead, judging by Google's response to moves in Europe.

Google responded by saying it would not pay for content and not display French news unless it is able to do so for free.

"We are under no illusions as to the difficulty and complexity of implementing a mandatory code to govern the relationship between the digital platforms and the news media businesses," says Frydenberg.

"We are not seeking to protect traditional media companies from the rigour of competition or technological disruption.

"Rather, to create a level playing field where market power is not misused, companies get a fair go and there is appropriate compensation for the production of original news content."

“For two decades, Google and Facebook have built trillion-dollar businesses by using other people’s content and refusing to pay for it," he says.

"Their massive failure to recognise and remunerate creators and copyright owners has put at risk the original reporting that keeps communities informed.

“The decisive move by the Australian government to go directly to a mandatory code of conduct between the international tech giants and Australian news media companies is a vital step that can help secure the future of Australian journalism."

Hugh Marks Nine CEO: "We congratulate the government for taking swift and decisive action on this important issue. Now more than ever, it’s important the global technology companies take some responsibility for contributing to our society through financially supporting the creation of quality Australian content. We look forward to working constructively with the government to get the settings in place for this to operate in a simple manner."

Seven West Media CEO James Warburton: “This is a welcome move from the Australian government - not only to act, but to lead internationally on this critical issue.  The media industry is dependent on the value of its content being recognised by all users - foreign digital platforms in particular. In the past month our news content alone has reached millions of Australians - it’s only right when this is accessed via third party platforms its creators are fairly compensated.  We fully embrace the opportunity to work closely with the government and the ACCC to implement this long-awaited action.”

ViacomCBS Australia and New Zealand chief content officer and EVP, Beverley McGarvey: “Having the ACCC develop the code(s) was always the best option as they are the experts in ensuring a level playing field in commercial bargaining environments. We look forward to meaningful discussions with the competition regulator and the government in the weeks ahead. It’s important to remember that digital platforms have been benefitting from all of our program-related content for years so for the code to be truly meaningful it needs to cover all premium content developed by a media company, not just news.”

Joan Warner, Commercial Radio Australia CEO: "We welcome the Government's move to redress the power imbalance between digital platforms and Australian media. We will continue to work constructively with all parties."

Free TV CEO Bridget Fair: “It has been clear from very early on that negotiations for a voluntary code of conduct were essentially a delaying tactic for the digital platforms in the hope that these issues would blow over. Today’s decision is groundbreaking and we are grateful to the Morrison government for their commitment to ensuring that Australians will continue to have access to quality Australian content. Google and Facebook derive huge value from the news and premium content generated by Free TV broadcasters, but their extreme market power means they don’t pay a fair price for it."