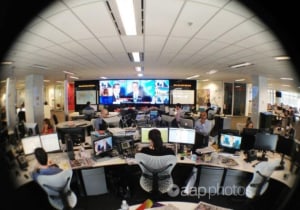 Australian Associated Press (AAP), the national news agency since 1935, is closing, unable to compete with free information on the internet.

"The saddest day: AAP closes after 85 years of excellence in journalism," tweeted editor in chief Tony Gillies. "The AAP family will be sorely missed."

The board of AAP, chaired by News Corp's Campbell Reid, had met on Monday to consider the future of the news service.
Reid said today: “The number of organisations choosing to no longer rely on the AAP service has made the business unsustainable.”
Nine, a major shareholder, had signalled it wanted to cut its payments to AAP, with CEO Hugh Marks last week describing the news agency as a "big cost" area. AAP is owned by Nine, News Corp Australia, The West Australian and Australian Community Media.
AAP in 2019 had revenue of $65.67 million, posting a small profit after a $10 million loss the year before. It has editorial staff of 180. Some will find jobs with AAP's shareholders.
CEO Bruce Davidson told a meeting of staff the business is no longer viable in the face of increasing free online content.

Gillies paid tribute to his team, describing them as the most humble and hardest news people.

“We have had a place like no other in journalism. We exist for the public’s interest and I now fear for the void left by the absence of AAP’s strong, well-considered voice,” he says.

Julie Tullberg, digital journalism coordinator, School of Media, Film and Journalism at Monash University, says the national wire has been a hub for developing first-class journalists.

"AAP services have provided the foundation of news in this country - for print, digital and broadcast platforms," she says.

"AAP journalists are often first to cover crime scenes, natural disasters, sporting events and court cases. The skill of AAP reporters cannot be underestimated in their role to provide accurate news - quickly, concisely and without bias.

"Without the volume of quality AAP reports, Australian newsrooms will no doubt feel the impact of this major loss in resources."

AAP was founded by Sir Keith Murdoch, father of the media billionaire Rupert who created the global media group News Corp, starting from a newspaper in Adelaide left to him by his father.
The news agency's initial role was to provide international news to Australian newspapers, saving on expensive cable fees by bringing one story to Australia instead of each title paying for their own.

Pooling resources made sense for newspapers. Then the underlying business was based on the tyranny of distance. Today the internet, with its instant communication, has made the cost of moving information over distance an odd concept.

AAP then evolved into a true national news agency, providing domestic news, as well as international coverage, to metropolitan and regional newspapers, and later broadcast media, building a national team of reporters and editors.

At one stage, AAP was a major shareholder in Reuters before the international news agency floated on the London Stock Exchange, providing a windfall for AAP's owners in Australia.

National news agencies are under pressure throughout the world, caught in the same digital disruption that media owners face.

The New Zealand Press Association closed in 2011 and AAP closed its New Zealand Newswire in 2018.