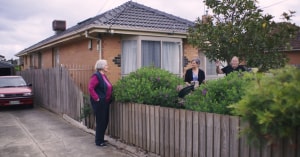 Australia Post has launched a campaign, Dear Australia, to bring the nation together to reflect on how they are feeling in such unparalleled times.

Created by The Monkeys, part of Accenture Interactive, Dear Australia sees the creation of a national letterbox whereby Australians from far and wide can come together to share their experiences of this time in a letter, to be preserved for future generations.

“The letters could be a message of hope, stories of community, a poem, song or an artwork by your daughter that the country needs to see," The Monkeys CEO Paul McMillan says.

Selected letters will be shared on the Dear Australia website allowing people to connect with stories throughout the campaign.

Eligible letters will also be archived for posterity at The National Archives of Australia in Canberra.

“We wanted to do something for all Australians, so that they’d have the opportunity to commemorate and reflect on their journey during an extraordinary time," Australia Post chief marketing officer Amber Collins says.

Produced by FINCH, the campaign airs this week and will run across broadcast television, social and radio.

If you’d like to write a letter to the rest of Australia, you can. Simply post it with a stamp to:
Dear Australia
Locked Bag
Australia 9999