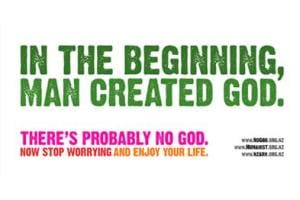 WELLINGTON: A play on a controversial ad which drew more than 1,000 complaints in the UK has attracted just one complaint in New Zealand.

The ad, which includes the line "there's probably no god" from the Humanist Society of New Zealand, is a deliberate nod to a campaign by the UK's Christian Party, which ran an ad during last year's election stating "there definitely is a god".

That ad drew 1,204 complaints, many of them from atheists who said the claim that god exists could not be substantiated.

The Humanist Party also ran a similar ad with the "there's probably no god" in the UK which attracted 392 complaints, making it the sixth most complained about ad in 2009.

The New Zealand campaign is currently running on out-of-home media in Auckland, Wellington and Christchurch.