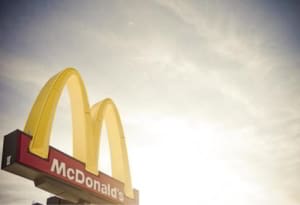 The Advertising Standards Bureau has upheld a complaint against McDonald's for marketing to children.

Complaints were made over a voucher handed out to recipients of McDonald's Team Spirit Awards at the University of Sunshine Coast Basketball Club, who were playing in under 10 and under 8 competitions.

Marketing to children is a key concern for advertisers with food manufactures not allowed to do so under the responsible advertising code. It's not the first time the restaurant chain has come under fire for its meal vouchers, with the ASB upholding an earlier complaint for handing out a voucher for fries at a children's playground.

This time, the voucher in question was redeeamble for a ‘small cheeseburger meal’ or ‘sealed snack wrap, apple bag and small orange juice’ at eight McDonalds restuartants across the sunshine coast.

The complaints against the voucher referenced the earlier breach noting that McDonald's is a signatory to the Quick Service Restaurant Initiative for Responsible Advertising to Children (QSRI).

“The advertiser noted it believed this was an isolated incident concerning the nominated restaurants only. Clearly this is not the case... The repeated breaches of the QSRI by this advertiser suggest it does not take its commitments seriously and has very little concern for the dietary health of Australian children.”

Complaints also noted that  "the total energy contained in the meal also exceeds the maximum recommendations for children aged four to eight despite these vouchers being handed out to children aged younger than eight years."

The ASB agreed that the “advertisement is directed primarily to children under 14.” It further upheld the complaint under Sechule 1.5 of the QSRI which provides:

“Signatories must not give away food and/or beverage products or vouchers to children as awards or prizes at children’s sporting events unless those products meet the nutrition criteria.”

The ASB determined that while the voucher included references to healthy choice options, the inclusion of other products was a breach of the code. However it also found that handing out a voucher that "contains limitations and restrictions for use" was not encouraging or promoting an unhealthy lifestyle.

In response, McDonald's said that: "as soon as McDonald’s became aware of the award, it instructed the participating restaurants to withdraw the award and any similar awards."