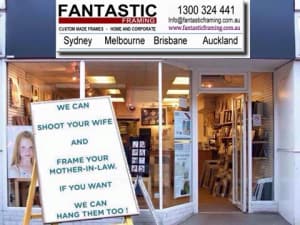 The Advertising Standards Bureau (ASB) has banned an ad by Fantastic Framing for perpetuating sexism and violence, with a sign that reads: “We can shoot your wife and frame your mother-in-law. If you want we can hang them too”.

A complainant who saw the advertisement outside of the store window said it is “sexist” and “violent”.

Fantastic Framing responded by saying they were “very surprised” to receive a complaint and they have only had positive responses in the past.

“This is smart advertising we are doing. There is no bad intention for this ad it is purely a joke which relates to marriage and picture frames,” adds the advertiser.

The ASB says while the spot makes reference to female family members it is not sexist, explaining that “advertisers are free to depict or make reference to whomever they wish in their advertisements”.

The board adds that stereotyping mothers-in-law is a common part of cultural narrative in Australia and therefore acceptable.

However the board determines the advertisement does portray violence that is unjustifiable in the context advertised.

The board says: “The intended humour has now worn off and the double meaning of the advertisement is not relevant in contemporary society given the high level of community concern with regards to violence towards women.

“The majority of the board acknowledged that the advertiser’s intent was to inject humour in to the ad but considered that making a joke about using a gun or hanging a person would not be found funny by most members of the community,” the board says.

The ad must be modified or discontinued.