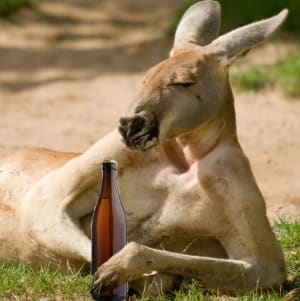 A complaint against an image used by Carlton Dry across social media has been upheld by the Advertising Standards Bureau (ASB) after it was found to promote cruelty to animals.

The complaint relates to a user generated image, which was posted on the Carlton Dry Facebook page and subsequently re-posted on Facebook and Instagram by the brand. The image depicts a person holding a bottle of beer near a kangaroo’s head while the kangaroo’s arms are outstretched. This is accompanied by the caption, ‘Kangabrew’.

One complaintant said: “This advertisement suggests giving alcohol to animals. This is cruel and constitutes animal abuse. In no way does this need to be encouraged. The caption "Kangabrew" suggests the beer is made for kangaroos, which may also encourage people to give beer to other animals for a laugh, again, this is animal cruelty."

Carlton removed the image from its social media after the complaint was received.

The ASB ruled the ad depict unsafe behaviour and breaches codes, ruling the suggestion of giving animals alcohol is “unacceptable”.

“Whilst the image and tagline of ‘kangabrew’ are clearly meant to be humorous, in the Board’s view a depiction of an animal being handed a bottle of beer does amount to animal cruelty,” adds the ASB.

The image had already been released by the beer brand prior to the ruling; however Carlton added its acknowledgment of the breach.

Moral of the story – animals don’t mix well with alcohol.