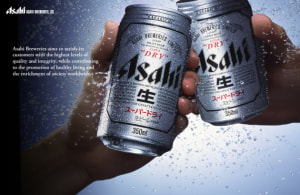 Asahi Beverages will review its entire media portfolio, including its Schweppes and alcohol brands, AdNews can reveal.

The accounts both sit at agencies within Dentsu Aegis Network (DAN).

Carat is currently the incumbent on the Schweppes account and was a foundation client for the business, with the Melbourne office opening in 2001 to service the account, while Asahi is managed by sister agency Vizeum.

It's thought that Asahi's decision to review both will lead to the accounts being consolidated under one agency. The reason this did not happen before due to a conflict with one of the DAN-owned agencies.

AdNews understands that Carat will be involved with the pitch, while agencies including PHD, which has the Pepsi and Carlton United Breweries account and UM, which has Lion and Coca-Cola, are most likely ruled out due to conflict of interest.

“We have a long standing relationship with Schweppes, in fact they are a foundation client for Carat," Carat Melbourne managing director Joseph Pardillo said.

"We consistently review our ways of working with all clients and will continue to stand by our work and our relationships, in growing their business and ours."

Cadbury owned the Schweppes brand up until 2009 when it sold the beverage business in Australia for approximately $1.185b to the Japanese-brewer Asahi.