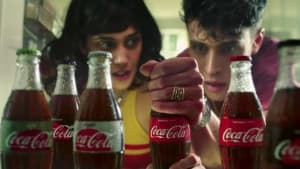 Sex sells, but are consumers still buying the narrative? Following Coca-Cola’s Pool Boy ad winning at Cannes, the analysts and Neuro-Insight wanted to find out. So what can the brain tell us about brand effectiveness? And what is our subconscious response to the ad?

Coca-Cola’s Pool Boy ad by Santo, received a Bronze Lion award in the creative category this year at Cannes. Launched in Australia early may, as part of the ‘Taste the Feeling’ global campaign, the ad narrates a brother and sister racing to offer a Pool boy a bottle of Coca-Cola to ultimately find that their mother beat them to it. The combination of creative style, diversity, humour and story telling aid in the overall entertainment of the ad, but what does this mean in terms of brand effectiveness? As a part of Neuro-Insight’s partnership with AdNews for the sixth year running; NI’s Cannes on the Brain series, unlocks via neuroscience, the subconscious response to this lovable ad.

Neuro-Insight measured brain activity to see how 50 females and 50 males responded to the ad. The specific technology used by Neuro-Insight is founded in work originally developed for academic and neuroscience research, and has been used to analyse the effectiveness of Cannes award winners for over four years. The technology allows us to simultaneously record viewer’s second-by-second changes in approach (like)/withdraw (dislike), emotional intensity, engagement and memory whilst watching advertisements. The measure Neuro-Insight predominantly focusses on is Long-term Memory Encoding, based on its strong and highly researched link to actual consumer behaviour. This measure reveals, second by second, what the brain is storing (or encoding) into conscious and unconscious long-term memory and is plotted in the form of a time series graph. The higher the lines on the graph, the more strongly that moment in the ad is stored in memory and the more likely it is to influence consumer behaviour.

Below is Neuro-Insight’s video timeseries showing how viewers brain’s respond to the Pool Boy ad. Immediately, you can see multiple strong peaks in long term memory encoding (NI’s key indicator for ad effectiveness). This suggests that information processed at these moments, has been effectively encoded into memory. We also see a fairly even balance in the way viewers process the information of the ad, as indicated by the red and blue trace. The red trace corresponds with memory encoding from the left hemisphere, which is primarily responsible for the encoding of the detail in experiences, such as text, dialogue or micro features. In contrast the right hemisphere, which is represented by the blue line, is responsible with the storing of global elements, such as soundtracks, scenery and broad themes, as well as the emotional underpinnings of a particular experience.

Early in the ad we see two powerfully encoded scenes (see highlighted sections below), at this point in the ad viewers are introduced to the admiring sister as she as looks longingly out the window to the pool boy. Cleverly integrated, in both of these scenes, lies the iconic Coca-Cola bottle. Whilst the different creative elements have ensued an effective memory encoding response, the branding has successfully linked itself to the narrative and stored into viewers’ memory. As well as memory encoding, NI also evaluate viewer’s engagement ( a measure associated with personal relevance and relatability) and emotional intensity (relating to the strength of emotion being experienced). As indicated by the peak in engagement, it appears viewers respond to the sister daydreaming out of her window with high relatability and relevance – this highlights the effective way in which Coca-Cola have engaged viewers in an everyday kind of moment. This response reflects objectives mentioned by Lisa Winn, Coca-Cola South Pacific marketing director, whom has stated “As a brand we are constantly looking for ways to keep our work fresh, exciting and engaging to our consumers. We do this by tapping into everyday moments and telling universal stories that connect with our consumers around the world”.

Rather incredibly, the strongest elicited response occurs as the brother and sister meet at the fridge with the Coca-Cola bottles clearly presented in the foreground. The Coca-Cola iconography is yet again, effectively stored in viewer’s long-term memory encoding. Shortly after this powerful moment, we see a drop in viewers responses, indicative of a phenomenon called Conceptual Closure. Conceptual Closure occurs when the brain perceives an event boundary (i.e a narrative sequence has come to an end), the brain then takes a brief period to process and store the previous experience (i.e the brain takes a break). In this case, it appears that viewers process the notion that both the brother and sister seek-out the Coca-Cola bottle as the solution to gaining the attention of the pool boy. The Conceptual Closure occurrence is not viewed as bad thing, as the dynamic and humorous story telling recaptures viewer’s high levels of processing.

As viewers follow the entertaining battle to the pool boy, with the brother and sister grasping their Coca-Cola bottles, wee see high levels of memory encoding, engagement and emotional intensity (see below). As the brother and sister ultimately discover their mother has beat them to it and delivered the Coca-Cola bottle, we see a drop in processing again suggesting Conceptual Closure. Viewers are met with the humorous twist and end to the story. The ad concludes with the emerging Coca-Cola branding logo, successfully retriggering viewers memory encoding for the final time. NI’s analysis is able to objectively showcase the effectiveness of creativity and branding, and how an entertaining and dynamic narrative has effectively and emotively communicated the Coca-Cola brand.