Applying neuroscience to Cannes-winning work: Airbnb's Until We All Belong 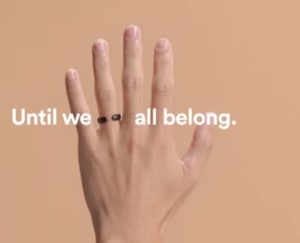 Companies have begun taking a serious stance on same-sex marriage. While the Australian government is yet to make a decision, brands are definitely rallying the cause. Following the launch of Airbnb's Until We All Belong, which centres on a unfinished ring that symbolises the gap in marriage equality, the analysts and Neuro-Insight wanted to find out what the public think about the initiative.

Airbnb - Until We All Belong

Clemenger BBDO have had a stellar year at Cannes taking out the coveted Agency of the Year award in conjunction with winning a grand total of 56 Lions across a number of different categories. Amongst that silverware, Clemenger picked up a silver lion in the Media category & a bronze lion in Design category for the marriage equality themed campaign they produced for the online booking service, Airbnb. Featuring several different people, firstly describing what appears to be a broken black ring, who then broach the issue of marriage equality, the spot adds a human element to what has, at least in this country, become a highly politicised and divisive public debate. There is no denying that this is a very powerful and emotive piece of storytelling that Clemenger has created, but what measurable impact does this spot leave with the viewer? As part of our exclusive Cannes on the Brain series, now in its sixth year, we analysed the brain activity of typical viewers to understand the impact that Clemenger’s creativity had on the brain.

Neuro-Insight measured brain activity to see how 50 females and 50 males respond to the ad. The specific technology used by Neuro-Insight is founded in work originally developed for academic and neuroscience research, and has been used to analyse the effectiveness of Cannes award winners for over four years. The technology allows us to simultaneously record viewer’s second-by-second changes in approach (like)/withdraw (dislike), emotional intensity, engagement and memory whilst watching advertisements. The measure Neuro-Insight predominantly focusses on, is based on its strong and highly researched link in influencing consumer behaviours is long-term memory encoding. This measure reveals what the brain is storing (or encoding) into conscious and unconscious long-term memory. Neuro-Insight’s Memory Encoding graph reveals how elements of the ad are stored in long-term memory. The higher the graph, the more strongly that moment in the ad is stored in memory and the more likely it will influence consumer behaviour

Below are the times series graphs for both male and female viewers’ responses to the Airbnb commercial. The red trace reflects memory encoding from the left hemisphere, which is primarily responsible for the encoding of the detail in experiences, such as text or dialogue. In contrast, the right hemisphere which is reflected by the blue line is concerned with the storing of global features, such as soundtracks, scenery, facial expressions as well as the emotional underpinnings of a particular experience.

The creative starts by featuring several different people who attempt to describe the symbolism of a broken ring. As the narrative flows from one talent to the next, we start to see differences emerge between male and female viewers, the most notable of which occurs the average level of memory encoding itself. During this narrative sequence, the level of memory encoding in female viewers is much higher than that of male viewers and closely tracks each new talent and their personal description of what a broken ring symbolises. In contrast, the response of male viewers is reduced, sitting largely within the moderate range of brain activity and does not show any initial preference for talent or message. It is not until the narrative links the missing gap in the ring as missing acceptance that we see a sharp retrigger in memory encoding for male viewers, which results in following visuals of the couple and their message of a ‘disconnect’ being very strongly encoded.

The second half of the advertisement also follows a similar trend, with female viewers continuing to elicit generally higher levels of memory encoding to each new talent and their personal stories. However, our data does reveal that both genders responded strongly to key message of the ‘gap needing to be closed’. In females, this is met with an exceptionally high memory encoding response, whereas in male viewers, although not as strongly encoded, the response did retrigger and drive an increase in memory encoding. As the narrative transitions into the personal pledges and notwithstanding the lower memory encoding response in male viewers, the levels of engagement and emotional intensity increased, indicating that the narrative was eliciting a strong emotional impact in both groups. This contrasted with the first half of the advertisement, where the levels of engagement and emotion experienced by both groups was lower.

In the lead up to final branding, we see a brief interval of Conceptual Closure that effects the ‘Until we all belong’ tagline screen in both genders. Conceptual Closure occurs when the brain perceives an event boundary, such as a narrative sequence has coming to an end and takes a brief period to process and store the previous experience. In this case, it is the combination of shortened pledges and fading soundtrack which is likely to have driven this effect. Importantly, the introduction of a voiceover call to action was powerful enough to retrigger and sustain memory encoding through to final branding in both genders.

In summary, Clemenger’s advertisement is a powerful piece of creative storytelling, that elicits different responses in male and female viewers alike. Female viewers stay with the entire piece, strongly encoding the personal journeys and brand message. In contrast, male viewers tend to encode the most pertinent message points rather than the general narrative. Therefore, if any cut-downs were produced, it would be recommended to consider using the specific talent and messaging that spoke to ‘missing acceptance’ and ‘closing the gap’ as these two scenes were either very strongly encoded or triggered a strong memory encoding response in both genders. In all, the main contention of the advertisement is well encoded within the URL call to action and final branding frame, which we feel, also makes this a very effective piece of advertising.