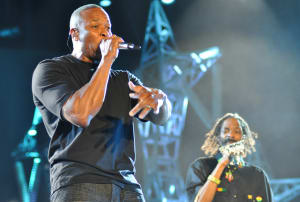 No press release arrived from Apple this morning when its new music platform finally went live. Instead the tech firm relied on the huge amount of pre-press that landed on June 8 unveiling the new Apple Music shiny service.

What arrived in the early hours this morning out of San Francisco, accompanied by an enormous online fanfare, was a new operating system, the Apple Music platform and by far the most interesting piece of the Apple puzzle: Beats1, the 24-hour online, global radio station fronted by ex-Radio 1 DJ and infamous music lover Zane Lowe and cohorts Julie Adenuga in London and Ebro Darden in New York.

Lowe introduced the station, saying, “We spent the last three months trying to build this radio station. Now we can build no more” and went on to play Pharrell’s ‘Freedom’. Twice.

Beats1 takes centre stage in the new Apple offering, which of course includes your typical streaming and download facility (where it goes head-to-head with Spotify), as well as a radio-style/playlist offering (where it takes on Pandora) and other playful techy ad-ons, such as Connect (formerly known as Ping) which gives musicians/artists a chance to communicate with fans using the service – it will be fascinating to see where this goes in terms of brand opportunity.

Beats1 is what sets Apple Music apart from its rivals. It’s most likely the reason that Apple acquired the platform and its associated founders (Universal Music/Interscope honcho and legendary producer Jimmy Iovine, Dr Dre and NIN’s Trent Reznor, who has fronted some of the ads trailing the launch), who very much continue to steer the ship.

Apple was never a company to do things by halves, after all.

In the middle of the new system sits the “radio” tab, given the listener the opportunity to stream Beats 1 which has a number of scheduled events throughout the day. Among those named as either appearing or presenting over coming weeks are Dr Dre (of course), Justin Timberlake, Elton John (who will have his own show), Eminem, Drake, Pharrell and Ellie Goulding.

A handful of music publications in the US and London were given an early peek at the service, including US stalwart Rolling Stone and London’s notorious Drowned In Sound. The reviews so far have been unfaltering in their praise. Interestingly, Rolling Stone posted a correction on its coverage, saying:

“Editor's note: Rolling Stone erroneously reported that there would be an ad-supported free version of Apple Music. It's Apple Radio that will be ad-supported in the U.S. The text has been corrected”

And this is where details get thin on the ground.

The three month-trial (the one incidentally that Swift opposed to, thus creating a deluge of PR which gave Apple the oh-so-convenient opportunity to paint itself in an artist/musician-friendly light and set itself apart from Spotify whose reputation has been blackened by the some in the same community. Note also that Swift’s record label is distributed by Universal Music – the same company that Beats founder Iovine has been involved with at a senior executive level for countless years. Coincidence? We think not) is obviously little more than a beta testing period for the service, but on a massive scale.

Until the three months are up, it is impossible to tell whether or not Beats1 will be ad-supported. Rumours this week circulated that, unlike Pandora and Spotify, or any other FTA radio station for that matter, it will not support spot ads, preferring to enter into global sponsorship arrangements with big brands. That still remains to be seen.

We wait with baited breath. Apple will never miss a commercial opportunity and this one is still staring at us in the face.