An Australian futurist looks at creativity from a marketing perspective 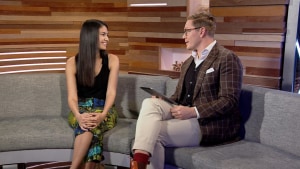 Anders Sorman-Nilsson, a futurist and innovation strategist, says he isn’t in the business of predicting the future.

“As a futurist, I do a lot of scenario planning with our clients,” says the Sydney-based Swedish-Australian consultant who has been keynote at TEDx in the US and Australia, and was nominated to the World Economic Forum’s Young Global Leaders in 2015.

His latest book, Seamless: a hero's journey of digital disruption, adaptation and human transformation, was published in 2017 by Wiley.

A general theme that emerged was that while technology has made it easier to get closer to consumers, those same consumers expect a higher level of convenience, speed and simplicity.

“I believe that we're entering into this second Renaissance at the moment, where creativity is not just for the sake of being creative or being different, but that there's really an art and a science to creativity,” he says.

“And the science of that is critical from a marketing perspective, in terms of the digital world. Everything is measurable.

“It was interesting listening to them all speak about where they looked for inspiration,” he says.

“Mark Fitzgibbon is quite into biology and evolution, and often started talking about the fact that the most successful companies and brands are those that are able to not just have one major play in the market or one investment, but that also scenario plan for the future.

MINI
Sorman-Nilsson says his talk with Alex McLean from MINI reveals an obsession with the post-purchase part of the customer journey.

“In the automotive industry, Mini are zigging when everybody else is zagging,” says Sorman-Nilsson.

“The automotive industry tends to be very focused on lead generation and scoring the next sale, whereas MINI is taking very much a post-purchase focus in the that they seamlessly design customer journeys.

“An Australian consumer buys something that is on the showroom floor -- it might be a red MINI or a one of their Countrymen vehicles -- or it might be that they order something that is bespoke, designed for them, and then it's usually a lead time of six months until they take delivery of that vehicle.”

MINI then does a farm-to-table like campaign, sending updates saying: "Hey your car seats have now been fitted, in Oxford, in the UK.” or “Now your cup holder that is uniquely designed for you is getting installed.”

CANVA - Melanie Perkins
“They've enabled, through their user interface, which is very intuitive, a digitally democratised design, and a design mindset, which I believe the world needs more of,” says Sorman-Nilsson.

“They found that they became part of, let's call it shadow IT, where a lot of enterprise employees were using Canva in their spare time as consumers.

“And then they were being told (by their employers) to effectively switch out for quite clunky enterprise software.”

And this is taking CANVA from SMEs to the bigger enterprises.

KFC - Michael Forster
QSR (quick service restaurants) represent almost an impulse category with the customer journey compressed.
You drive past a drive-through KFC, or whatever it happens to be, and you go, "I'm hungry."

“And you might remember an Instagram promotion which made you want to lick the screen, and now you have a chance to soothe that itch, says Sorman-Nilsson.

“They've very mindful of how they create futuristic customer experiences for their guests, to be a front of what I call digital mind but also be geo-available to soothe analog hearts as well.

“And so the way they connect with digital minds and analog hearts is through great content, great imagery, but also increasingly being in the QSR space through the digitization of some of the touch points in their physical locations.”

Research shows that if a person walks into a fast food restaurant and they see a line with five people most just turn around and walk away.

“One of the ways in which KFC is fixing this problem is by implementing kiosks, or either enabling people to pre-order via the app, but also have an intelligence built into that pre-order,” he says.

If you pre-order in the morning, there will be an update via the app saying "Hey, we want your fries to be the crispest that they can possibly be. So would you mind letting us know when you're, say 10 minutes away, or 5 minutes away."

He sees this as another form of storytelling, allowing us to make better use of our time doing other things while we're waiting for our food.

“Both MINI and KFC are showing that by being very data-centric, they can also be very human-centric,” he says.

nib - Mark Fitzgibbon
Sorman-Nilsson says he recently switched to Qantas Health Insurance, which is NIB with a private label.

“Mark (Fitzgibbon) really sees that we're at this dawn of a new era, where health care actually starts living up to its moniker,” he says.

“So rather than being, which traditionally the industry has been focused on, sick care, now it's going to be all about healthcare and prevention, as opposed to cure.

Sorman-Nilsson says Fitzgibbon interesting insights about using communication tools, such as Workplace by Facebook, to enable his workforce to feel more like a community so that they could remove barriers of communication, work collaboratively and foster better innovation.