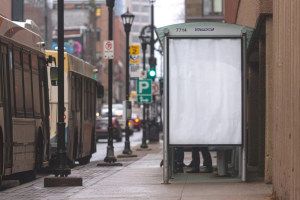 What happens when a creative agency drops advertising?

Wunder, an independent agency in Canada, decided that the best way to get noticed was to use advertising space to create a different kind of white Christmas.

The agency co-founders, Stephen Flynn and Mike Postma, left blank the area where ads normally sit as an exercise in giving everyone a break from advertising during the holiday season.

They spent $10,000 on prime placements in Halifax, Nova Scotia, to run the white “ads” during the busiest advertising month of the year.

"So far the response has been huge both with the general public and the advertising community," says Stephen Flynn, the creative director at Wunder.

"People really appreciate the gesture as well as the simplicity and have been throwing around words like 'genius' and 'brilliant' which is quite humbling.

"But on the flip side some industry people are debating whether or not an agency should be sending this message that ads are an annoyance and people need a break from them."

Flynn says it seems naive to work in the advertising industry and assume that people love ads as a general rule.

"The skip ad button exists for a reason and it’s our job to create content that people genuinely want to interact with and share based on its merits," he told AdNews.

"At Wunder that is something we truly believe in and try to do with every creative campaign, our kinda agency tagline is 'Make things people like'.”