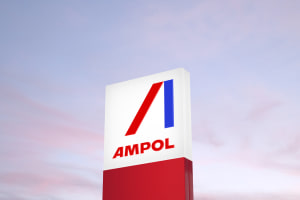 Working with Caltex Australia and now Ampol since 2015, Houston has supported the transformation of the business brand portfolio including the launch and rollout of the new retail brand the Foodary and now the new Ampol.

“The business needed to fast-forward twenty years of evolution whilst retaining its original DNA. The strong bands of the original logos and colours gave us the creative foundations of the new mark," Houston Group executive creative director Alex Toohey says.

"The new, modern and distinctive leaning A is the centerpiece of the new design, symbolising the brand’s forward momentum, and a more refined logo for today’s applications."

Houston Group CEO and founder Stuart O’Brien says the return of Ampol was much more than a nostalgic one, with the brand retaining latent equity in Australia as a trusted Tier 1 fuel provider.

“There is no doubt, however, that we as a nation have grown and changed since Ampol was last seen in Australia, and the contemporisation of Ampol was critical in bringing the brand back to life,” O’Brien says.

Ampol merged with Caltex to form Australian Petroleum in 1995, which then became Caltex Australia in 1997.

The company announced it would begin transitioning back to the original Ampol name over three years, starting in 2020.

“Our fresh new symbol will connect Ampol with a new generation of customers and underpins our commitment to again make it Australia’s most loved and admired fuel brand," Ampol interim CEO Mathew Halliday says.

"The striking simple symbol will be a beacon for customers when on the road.”

The first Ampol sites will appear in Sydney and Melbourne in the second half of 2020, with roll out nationally in 2021. The transition from Caltex to Ampol will be completed by the end of 2022.

The Ampol rebrand comes as another in a series of large-scale brand transformation projects for Houston Group, alongside Qantas in 2016, NRMA in 2018 and Toyota in 2019.