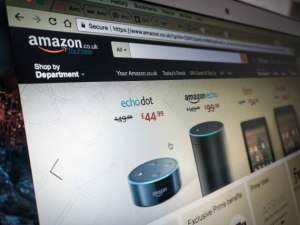 The “Amazon effect” on consumers is likely to evolve how people look for products with a migration of search activity gravitating towards the online marketplace from search engines like Google.

A lot of the focus on the arrival of Amazon has centred on the potential damage it could wreak on the retail sector, but an expert on how consumers use digital media believes its impact over time will change the consumer journey as we know it with implications for media and marketing.

In markets where Amazon has established a strong grip on online retail, such as in the US, where it accounts for about 50% of e-commerce sales, consumers have migrated from Google to Amazon as a first port of call when searching for goods.

“We are seeing more of a consumer journey start with Amazon rather than Google,” says Paul Dalton, the international chief media officer of digital agency DigitasLBi.

“As a first step, they search within Amazon, looking at products and reviews from a trusted source that Amazon is very well known for. They will either use Amazon to purchase it or jump over to a brand site to look at other products from that brand.”

A study by financial services firm Raymond James found that Amazon is already the starting point for 52% of ecommere searches, compared to 26% for search engines.

The concerning part for Google is that this shift towards Amazon appears to be more pronounced in younger generations, as this Raymond James chart illustrates. 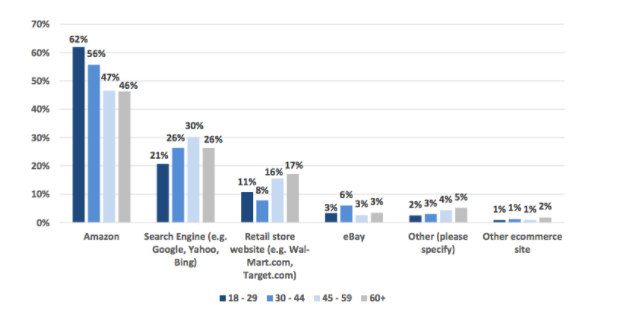 Amazon's effect on consumer habits has helped it carve out an important role in the discovery phase of the consumer journey. With the ability to place an order in just one click and plenty of attention grabbing recommendations to keep shoppers on platform, Amazon has become an e-commerce ecosystem of considerable scale.

Dalton believes the migration of "first point search" activity out of Google and into Amazon could have a flow on effect throughout the search market.

“You will see a rise in the potential cost of search because brands that were competing against their competitors’ search terms and brand terms will now be up against a very powerful company that has deep pockets and I think it will drive up the cost of search,” he says.

An emerging force in advertising

Amazon collects vast amounts of consumer data that can help brands target customers on the platform. Although nowhere near the scale of Facebook or Google, Amazon’s global advertising sales are growing at such a pace that could soon emerge as a third global force in digital advertising.

WPP boss Sir Martin Sorrell estimates Amazon’s annual advertising revenue is as high as US$2.5 billion, while eMarketer places it at US$1.81 billion.

Google tops the list with US$73.8 billion, followed by Facebook (US$36.3 billion) and Alibaba (US$17.4 billion), but as Amazon rolls out and establishes in more markets, its growth potential is huge.

In Amazon’s second quarterly results, the category that includes ad sales grew by 51% year-on -year, which is around the same rate as its retail subscriptions business, Prime.

“I think Amazon is a company that is essentially a sleeping giant,” Dalton adds. “The role that they will play and the size of the market share they will have will be significantly larger than it currently is.”

Amazon’s ambition is not just to dominate e-commerce, it wants to speed up and simplify the way people interact with technology and connected devices. On this front it has a powerful ally.

In 2014, Amazon launched Echo, which allows users to control connected devices through a voice-activated personal assistant Alexa. Echo hasn’t yet launched in Australia, but its rival Google recently went to market with its own version, Home.

Both companies have gambled on voice activated personal assistants becoming the norm in the future.

“Amazon are looking to make that consumer purchase journey more seamless and easier and enable a level of simplicity that will make it, in their mind, more habit-based purchases. Alexa has potential to learn your purchase habits and make recommendations on replenishing things that are running low,” Dalton says.

“When those things start to take hold, it’s going to provide new challenges for marketing and media channels that are already established.”

DigitasLBi, a part of Publicis Groupe, helps brands use behavioural data to identify potential customers and map out the consumer journey, such as the most effective channels and moments to reach them.

Dalton says that the agency has been preparing for Amazon’s arrival in Australia for “some time”.

“We will transfer a lot of this intelligence across to make sure we and our clients are ready for this and not caught on the hop.”