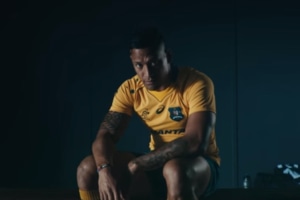 The career of international Rugby Union star Israel Folau is all but over following a homophobic social media post he made earlier this week, with brands turning up the pressure on Rugby Australia to sack him.

The post, which claimed "hell awaits" homosexuals, was posted on Folau's Instagram this week and still remains on his feed.

Yesterday Qantas, a major sponsor of the Wallabies and Rugby Australia, urged the governing body to take action against Folau.

The airline, which is currently in the midst of negotiating a new contract with Rugby Australia, has been an outspoken supporter of the LGBTQI+ community, with its CEO Alan Joyce openly gay.

In a statement overnight, Rugby Australia revealed it would act on the matter, stating that barring any "compelling mitigating factors" the body will terminate his contract.

Both Rugby Australia and NSW Rugby Union (which is responsible for his contract with the Waratahs) stated they had both made "repeated attempts" to contact Folau since Wednesday.

"Whilst Israel is entitled to his religious beliefs, the way in which he has expressed these beliefs is inconsistent with the values of the sport," a statement from Rugby Australia and NSWRU CEO Andrew Hore says.

"Israel has failed to understand the expectation of him as a Rugby Australia and NSW Waratahs employee is that he cannot share material on social media that condemns, vilifies or discriminates against people on the basis of their sexuality."

Folau's comments could also cost him further deals with his individual sponsors, with ASICS having an affiliation with the Rugby international.

Agencies weigh in
BCM managing partner Phil McDonald told AdNews that when brands decide to sponsor famous sporting teams they take on the star players that make up those teams as well. Both as potential brand equity drivers and potential brand liabilities.

He says sporting stars are "like all of us", they enjoy the right to free speech, just as Folau does, adding while we might not agree with his point of view, we can’t stop him from sharing it.

"Brands like Qantas walk into an arrangement like this with their eyes wide open and they have made a strategic decision at some point to divert funds from traditional brand building into a sponsorship based brand-building platform.

This is a perfect example of the risk brands take by employing this approach," McDonald says.

He says Qantas has got it "totally right" in taking a stand and distancing themselves, adding in a situation like this Mediahub would advise its clients do the same.

"The core benefit of a sponsorship, an ambassador arrangement or even an influencer partnership is association, and just as a brand is connected to the on-field wins and the highs, they can be adversely impacted when there is controversy or poor behaviour," Livingston says.

"When this happens there is a risk that a brand’s association with an individual becomes too intertwined and they can be tarnished by the same brush from the general public.

"In this case, it is incredibly important for a brand to take a strong position against the individual, especially when the comments from Israel Folau are so harmful and disrespectful."