AdNews Podcast: TV's first half in review with Publicis and MediaCom 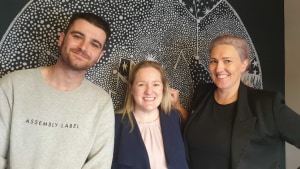 The AdNews Podcast has returned after a brief hiatus, with this month's edition all about the year in TV so far.

Looking back on the past six months in television, both Butterworth and Fraser explore how each network has performed so far, why the ratings have gone the way they have and what lies ahead for the remainder of the year.

"Nine dominated the beginning of the year. Traditionally we used to look at the quarters like Seven would own quarter one, Nine would own Q2, but now they've flipped that with Married at First Sight of course which has been a ratings bonanza," Fraser says.

"So it's hard to come back after Q1 if you hit it hard in that time and then you have a good follow up in Q2 which they did with The Voice and that just leads to a successful year."

For Butterworth, the importance of how Ten can start to "claw some of the audience" was a major talking point, as she emphasised the need for three strong competing networks.

"I think all three networks would agree that's what you need within the marketplace. If you don't, that leads to all sorts of inventory pressures and I guess pricing pressures from the two dominant networks as well. It puts Ten in an unstable position which is not what we want," Butterworth says.

The conversation also moved into the broadcast video on demand (BVOD), with both media executives highlighting the value the channel has for clients.

However, both were quick to point out the growth of the channel is limited until OzTam and Nielsen can complete and effectively launch the Virtual Oz (VOZ) measurement platform.

"The biggest problem with BVOD for us as buyers is that we do not have enough clarity on measurement of BVOD at the moment," Fraser says.

"We really can't see what they're doing together; how many people are watching Seven and Nine BVOD. All we have is the people who log in and their subscribers. So, that's frustrating."

To hear more on what Fraser and Butterworth have made of the TV slate in 2019, the growth of BVOD and the world of Foxtel and Netflix, be sure to check out the full podcast below on Acast or through iTunes.