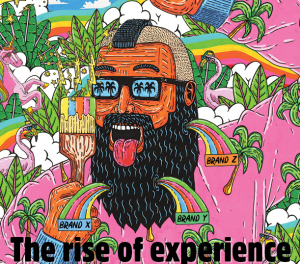 There’s just four days left to vote for the AdNews Cover of the Year.

This year we’ve had agencies such as Thinkerbell, TBWA Sydney, Ogilvy and Special Group take on the challenge of creating our magazine covers and we’re now hosting a competition to find readers’ favourite.

The winner of the AdNews Cover of 2019 will receive a specially made bespoke AdNews ‘A’ trophy and the cover will feature in an exhibition of work at the AdNews Agency of the Year in April 2020.

We’ve compiled a wrap of all the 2019 covers below.

January-February
To kick off 2019, AdNews called on TBWA Sydney to create the year’s first cover for our investigation on the changing shape of the agency model. Rather than taking the ‘doom and gloom’ approach to the brief, the team at TBWA wanted to show how creativity will be the key to success for the future of agencies. Working with a 3D and retouching artist at Limehouse, the agency set itself a mission to create something that provoked and demanded people’s attention. An award pencil-style bullet smashes through an android’s skull to show how at the end of the day, it is a good idea that will cut through all the noisey and chaotic digital landscape. 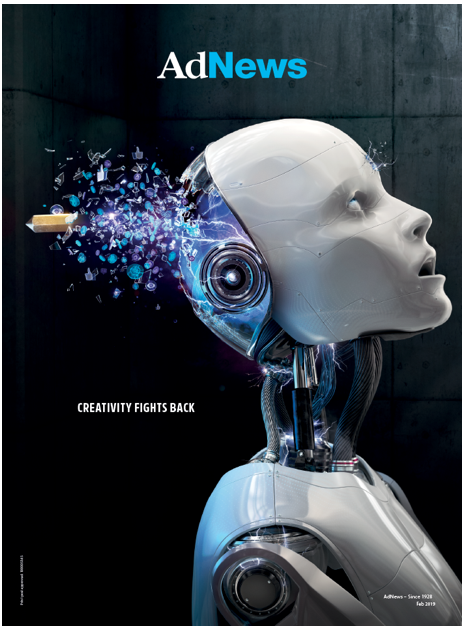 March
With International Women’s Day held on March 8, we dived into an investigation on the evolution of women in advertising for our March edition. AdNews called on LIDA Australia, part of M&C Saatchi Group, to not only create the cover but also present data-driven findings for the feature. Using its AI-powered bot Minnie, LIDA looked at how women have been represented in advertising in The Australian Women’s Weekly from the 1930s through to today. Reflecting those findings, the cover shows how representation of the female gender has transformed from servitude to self-actualisation. 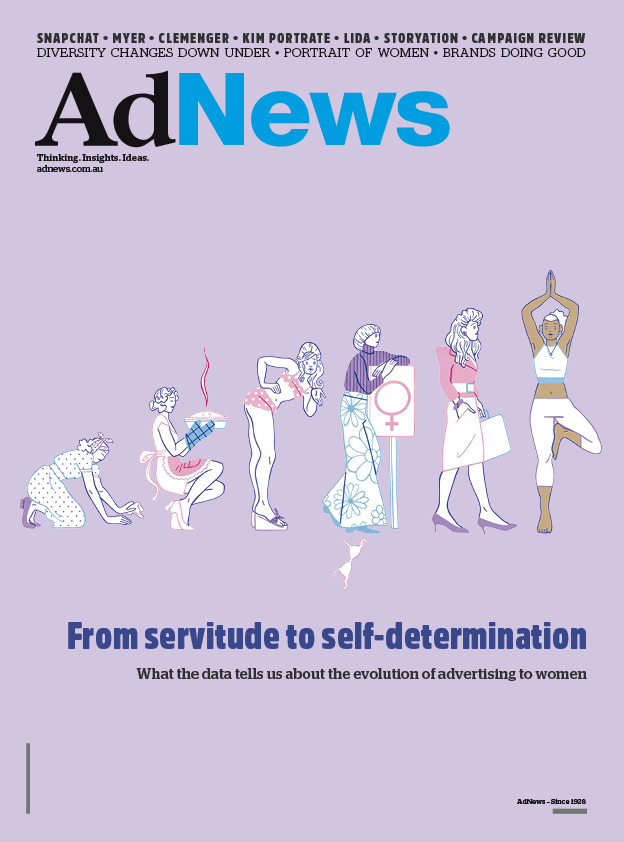 April
Mental health is one of the biggest issues faced by adland today. Last year’s Mentally Healthy study brought the issue to light with findings showing people in the industry displayed greater signs of mental illness compared to the national average. For our April edition, AdNews decided to launch an investigation to shine a light on the serious issue and find out more on how the industry is tackling it. Instead of calling on one agency to create the cover, we enlisted youth industry committee Youngbloods to do the job. The winning concept SAdNews uses clever, format–breaking wordplay coupled with a succinct subtitle and visual treatment to present the committee’s stance and feelings surrounding the findings. 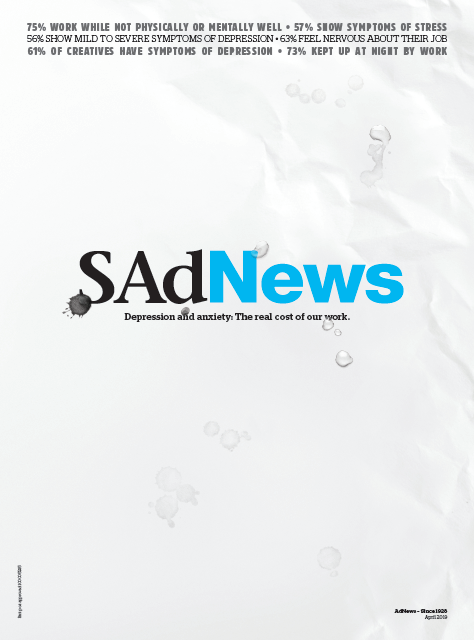 May
The advertising industry is rife with different peak bodies but who are they and what exactly do they do? In the May edition, AdNews set to work to answer these questions while handing Ogilvy the challenge to visualise these largely faceless bodies. Avoiding analogies, Ogilvy wanted to keep it simple. After presenting three contenders to us, we were all in consensus: the alphabet soup. A powerful visual, it shows how adland is laden with these bodies and their acronyms. 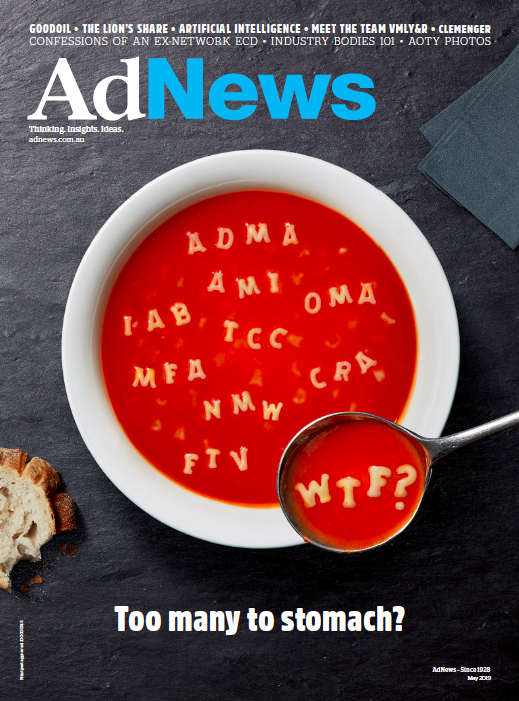 June
For the June edition on experiential marketing, we stepped outside of our normal agency-designed cover and reached out to Sydney-based artist, freelance illustrator and poet Joel Moore — also known as Mulga. Known for his unique intricate line work and bright colours, Moore brought both his signature style and background in producing art for brands together, to create the AdNews cover. The bright cover culminates in a self-portrait of Moore among an acid-trip explosion of colour, rainbows, unicorns, stars and palm trees highlighting the experience he and other artists create for brands. 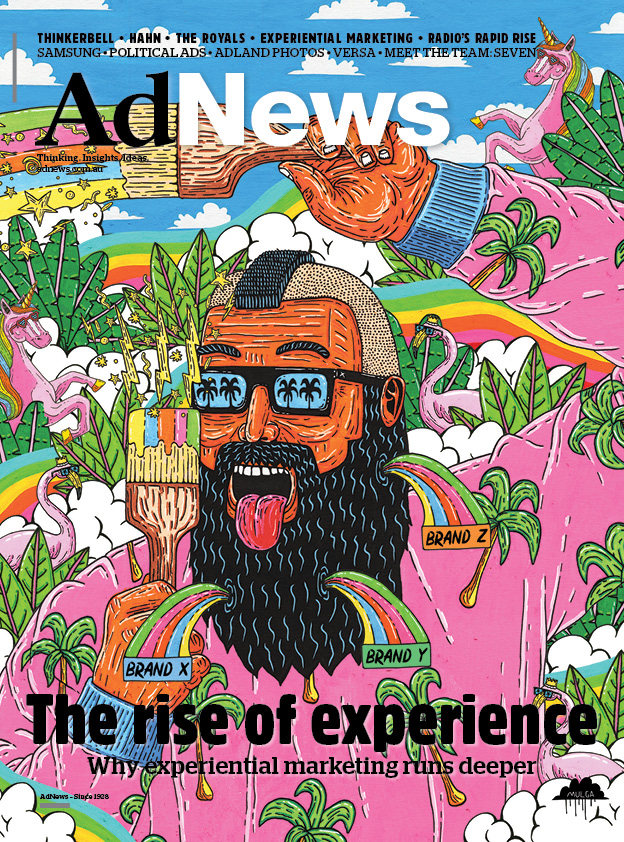 July
One year on from our first investigation into adland’s diversity — or lack of — we decided to check in to see where the industry sits now. AdNews called on Australian hot shop Thinkerbell to create a cover for the July edition that would mirror the progress. Using the notion of discomfort as a point of tension, the thinkers and tinkers came up with the perfect picture to summarise adland’s state of diversity. The end result? An overstocked old white male ‘Adman CEO’ doll marked down as the industry paves the way for a more diverse cohort of leaders. 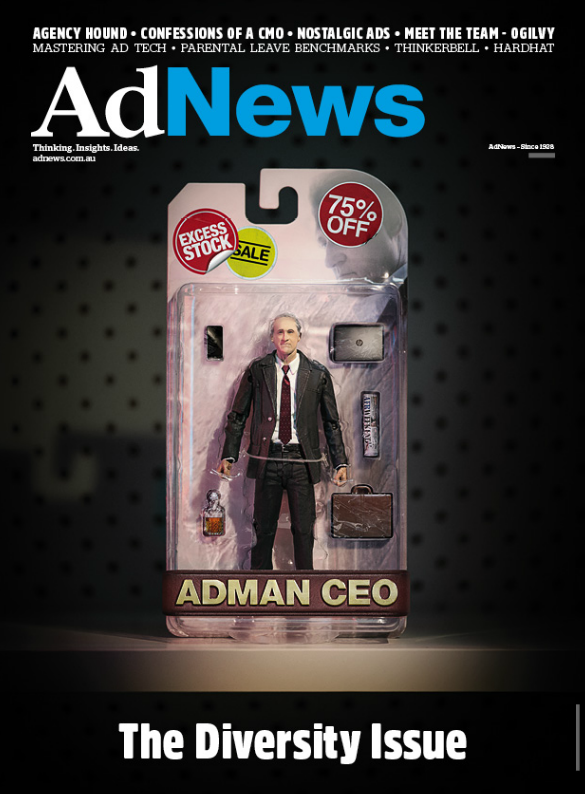 August
The August edition saw AdNews delve into the hotly debated world of climate change and its impact on the advertising industry. With the launch of an offering geared toward helping its clients re-think the way they do business to reverse their impact on the planet, Host/Havas was the perfect agency to devise a powerful cover. The team wanted to create a visual that conveyed the overall attitude toward the matter. Keeping it simple, the subtle fingers up displayed ironically through industrial chimneys polluting our air and the copy ‘Screw You, Climate: The dirty business of ignoring climate change’ did just the job. 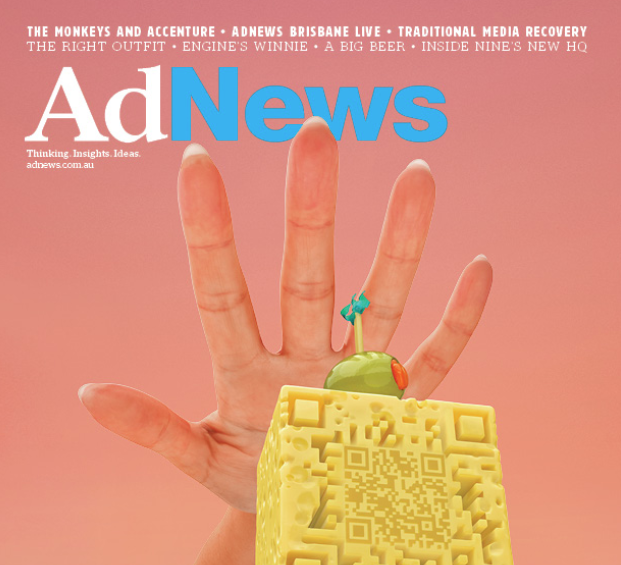 September
Love them or hate them, influencers have become a powerful advertising medium in today’s world. For our September edition, we brought Special Group Australia on board to deliver a cover that would reflect our first influencer marketing investigation. Going straight to the source of our story, the team enlisted a real life influencer to not only star on the cover but also share a sponsored post on Instagram when the issue came out. Emulating Instagram’s focus on aesthetically pleasing visual content, the team delivered an inception of @wendy_online presenting the September issue against a wall of vibrant flowers at influencer hotspot and cafe Social Hideout. 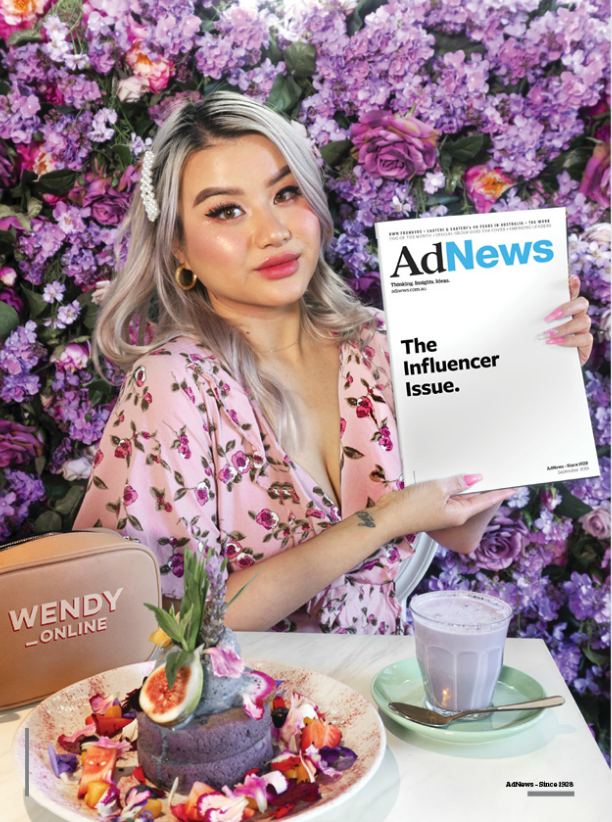 October
Debuting our first edition dedicated to Brisbane, we tasked one of the Queensland capital’s oldest agencies BCM to come up with a cover that illustrate the city’s accomplishments. With no spares in sight, the team arranged a photoshoot to present specially crafted bowling pins which were auctioned off at a charity event supported by the local industry. No two bowling pins are the same – a reflection of the breadth of creative talent in Brisbane – with techniques to create them ranging from traditional wood-working skills like lathing and carving to concrete casting and 3D printing. One was even adorned with more than 10,000 matchsticks. 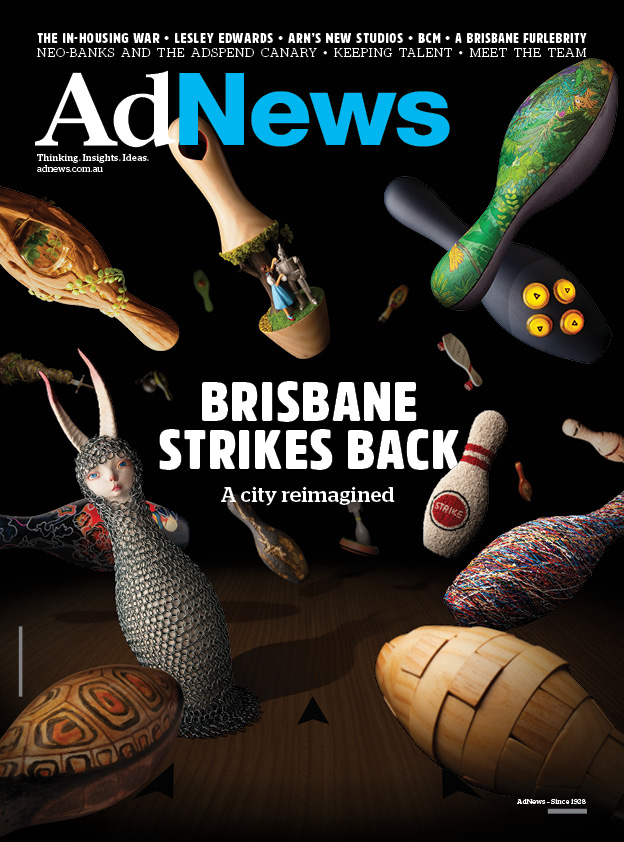 The Annual
As 2019 draws to a close, our coveted final edition of the year The Annual tackled the biggest question on everyone’s lips: where’s the money? As we attempt to determine how marketers are divvying up their budgets, we called on DDB Sydney to translate this story into one single image. The team gathered all arms and legs of the industry for a “last supper” style dinner turned battle to get their share of the pie. Everyone from Mike Rebelo and Brent Smart to Tara Ford, David Nobay and Mike Connaghan came together to help deliver a cover to front our biggest edition of the year. Even Sir Martin Sorrell makes an appearance.