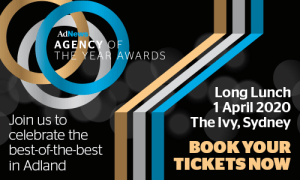 UPDATE: AdNews Agency of the Year has gone virtual this year. Tune in for the livestream on Thursday September 3.

AdNews is delighted to unveil the finalists for this year's AdNews Agency of the Year Awards.

AdNews would like to thank everyone who entered the awards. The calibre of entries were high with AdNews receiving a record number of submissions.

A special thank you to all of our wonderful judges who took the time to go through each and every one of the entries.

This year the event will be held via a livestream on Thursday September 3.

Now, for what you’ve all been waiting for…

The finalists list for AdNews Agency of the Year 2019:

AdNews is delighted to partner with Google, PubMatic, Outdoor Media Association, SpotX, NOVA Entertainment, IVE and Adstream for the AdNews Agency of the Year. AdNews would also like to thank Andrew Sherman, founder and CEO of The Transition Coach, for offering the winner of the Emerging Leader award an Executive Coaching program of eight coaching sessions.