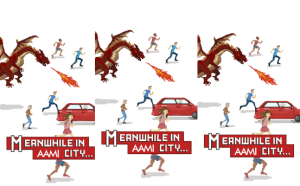 AAMI Insurance is making a play for the eyes of the elusive millennial audience, pushing into Snapchat through the use of the social platform’s collective ad model, 3V Advertising.

The insurance company is using Snapchat to tie its content to trending topics. It launched its second Snapchat campaign yesterday, created by content marketing agency Edge, which aired science fiction themed spots for fans during Comic-Con in San Diego. Earlier this year, it produced three ads to coincide with the live coverage of the NBA Draft.

AAMI has previously invested heavily in TV, most known for its Rhonda and Ketut campaign and recognisable ‘AAMI girl’. The company overhauled its messaging late last year to feature the “Not Very Insurancey” tagline.

AAMI marketer Anthony Russell says pushing the new tagline is not something that can be done in one channel and as TV audiences continue to fragment, Snapchat is becoming more important to the brand.

“We understand our audience is fragmenting and the traditional TV audience is skewing older, so Snapchat gives us the chance to reach young people who are not familiar with AAMI,” he says.

“We know there are some people not watching TV at all so Snapchat is a good place to be for us.”

Russell tells AdNews the move into Snapchat was not a “heavy investment” and while digital adspend has cannibalised a small portion of TV adspend, TV is “still king” for the brand.

“Snapchat is part of the mix,” Russell says. “You can’t just push out an awareness message on TV, you have to nurture the message wherever your consumer is.”

Last week, AAMI was forced to pull and replace one of its TV advertisements after a flux of complaints from customers. The ad featured a girl is sitting in the family’s broken down car blowing a single, ear-piercing note on her recorder as she waits with her parents for help.

Russell says the company had expected irritation from the ads, but did not expect the significant backlash the ad received.

It’s a dire warning for brands that disrupt the nature of platforms, which is why AAMI is putting effort into creating content specifically for Snapchat, rather than repurposing other ads for the platform.

Edge head of strategy Richard Parker says AAMI has been one of the agency’s first clients to experiment with Snapchat now it’s opened an Australian office.

“AAMI is an insurance company, which is typically a low interest category. People don’t get excited about service brands so trying to find an opportunity to talk to a millennial audience in a fun and engaging way about a topic can be quite difficult,” he says.

Parker and Russell agree AAMI is using Snapchat as a brand awareness tool, rather than using it to drive sales at this point.

“It’s not something that drives clicks at this point,” Parker says. “AAMI isn’t using it to drive people into its ecosystem or website and it’s not there to drive the last click to purchase.”

Parker expects as Snapchat’s ad unit becomes more sophisticated, there will be more opportunity to monetise from the platform although he recognises it still has a long way to go.

“I’m hesitant to call Snapchat the marketing channel of the future – there are a lot of emerging channels and some have a bigger role than others in the mix,” he says.

“Facebook is incredibly successful at pivoting and changing its product to leverage its audience. It’s a serious contender. Snapchat has a very long way to go before it can rival Facebook in channel stakes.”