A pitch to executive creative directors to increase diversity 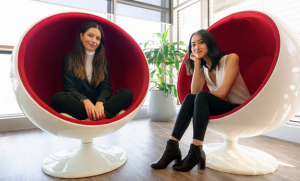 The advertising industry has known for a long time that it has a problem with diversity and now Ogilvy’s Ava Frawley and Jasmine Subrata have created a tool to show it exactly what that looks like.

Changing the Face was designed during a one-day workshop in 2017 by the duo, along with their team Pia Barrera, Justin Borromei, Feby Plando, and mentor Chris Berents. Hosted by Glue Society and D&AD the goal was to find a solution to the lack of diversity across Australian advertising.

The tool will collect the head shots of the nation’s executive creative directors and collate them into one image using Microsoft’s AI technology, with the image of advertising’s “face” presented at a launch event next month.

“The industry has been talking about diversity for quite some time but discussing it and doing it are two very different things,” Subrata says. “That’s where Changing the Face comes in. We want to give agencies the ability to walk the talk, together.”

Changing the Face will also provide a tool for agencies to track how they have progressed each year on diversity. While there are already initiatives across adland that track and support diversity, such as The Agency Circle and Free the Bid, Frawley and Subrata hope the visual aspect of the project will take the discussion to the next level.

“It’s hard to understand a problem without seeing it firsthand,” Subrata says. “Because ad folks are visual creatures, it’s more impactful to have something tangible. We want people to reference this face and say, ‘There’s the problem. Now, where do we go from here?’.”

Frawley adds that using AI to create the “face” takes out any subjectiving in the project, encouraging senior people to recognise the issue and take action.

“We are launching this idea where the issue is most pronounced, at senior levels in the creative department,” Frawley says.

“But that’s not to say our industry doesn’t face other diversity concerns. Our hope is that the website will work as a tool that encourages people in senior positions to make a conscious effort in hiring a pool of diverse employees across all levels and departments, and then give them the opportunities to grow and develop.”

The discussion around diversity often feels like a “laundry list” that needs to be checked off, says Subrata.

“Diversity is a lot more than what you can see; it's finding people who come from all walks of life and have experienced the world differently,” she says.

“Having a group of women who come from the same suburb and the same school doesn’t make a workplace more diverse. But having individuals who are much older, or speak a second language, or come from a different socioeconomic status — that’s the good kind of diversity that we desperately need in advertising.”