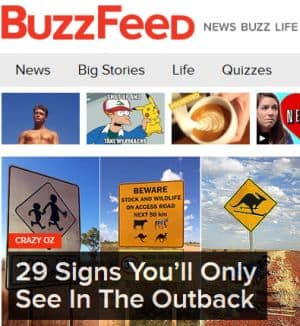 BuzzFeed has received a $50m injection from tech investor group Andreesen Horowitz, founded by two of the savviest men in Silicon Valley. The content organisation will use the money to build out its motion picture unit as the next generation of content companies eye brand dollars and look to usurp traditional broadcasters.

BuzzFeed said the move was part of a major expansion plan. The company has moved away from listicles and click-bait style articles into harder news in recent years, hiring award winning heavyweight journalists in the process. meanwhile, traditional news outlets have all rushed the other way, adopting the right hand rail approach to lighter content in a bid to rack up hits.

As that approach becomes ubiquitous, Buzzfeed is seeking to further differentiate itself to stay ahead of the pack. Now it will separate its editorial team into three streams: BuzzFeed News, Buzz and Life.

It has also pioneered shareable video content and has had success in bringing brands to the party. Video content attracts a premium from advertisers, often several multiples higher than traditional display advertising. Now the company wants to make longer form video content and its video division will become BuzzFeed Motion Pictures. The firm said it will cover everything from animated Gifs to feature films.

The move is interesting as it could signal the next wave of taxation for traditional broadcasters whose revenues are already being decimated by audience fragmentation. It could also be a worry for traditional film studios and mirrors the moves Google-owned YouTube has made in fostering richer content creation. YouTube aims to build a New York 'creator space' - essentially a fully equipped film studio - in New York to match its Los Angeles facility.

BuzzFeed CEO Jonah Peretti signalled the firm's intent by stating the move was about "creating a new organisation and expand rapidly in all areas". The aim is to become "the number one digital media brand" across mobile, video and social media.

Marc Andreessen, the man behind Mosaic, Netscape and Ning and Ben Horowitz, a tech entrepreneur who co-founded Opsware, clearly back that vision.

See the full release below:

New York, August 11, 2014 — BuzzFeed announced today a major expansion plan that will build its brand, scale its business opportunities, grow traffic and revenue faster on the web and mobile and maintain its entrepreneurial culture. BuzzFeed’s editorial team will grow and become BuzzFeed News, Buzz, and Life to expand its offerings across the board and to make clear the differences between the three types of content. BuzzFeed’s video division will expand and become BuzzFeed Motion Pictures and will, in addition to its existing short form, focus on all moving images from a GIF to feature film and everything in between. All of BuzzFeed’s branded offerings for advertisers will be centralized into one group, BuzzFeed Creative, creating a streamlined process across video and publishing for brands. The company will also launch a new distributed division to create content off BuzzFeed to scale BuzzFeed’s deep understanding of the social web. BuzzFeed International will continue its rapid growth and expand to India, Germany, Mexico and Japan this year. The company also announced that it has completed its Series E financing of $50M from Andreesen Horowitz and the firm’s general partner, Chris Dixon will join the Board of Directors. Kenneth Lerer, a co-founder of the company, will assume the role of Executive Chairman and advisor and work closely with Jonah Peretti on company strategy.

“Over the last decade, traditional media has been upended by technology, a disruption of the print, video, news, entertainment and advertising industries that is now accelerating at lightning speed. We created BuzzFeed because people still want to be informed, entertained, and inspired but the way they consume media has dramatically shifted. Today we think the time is perfect to grow our company, build our brand and greatly increase the content we are producing so we can be the number one digital media brand. The investment from Andreesen Horowitz will allow us to double down on our company’s mission by creating a new organization and expand rapidly in all areas,” said Jonah Peretti, Founder and CEO.

“The future of content companies is crystal clear: mobile, video, social and tech. Expanding BuzzFeed’s business across each of these areas is the key to the future. With distribution fully built out, content is the future and this expansion will allow us to create more and more content across the social web,” said Kenneth Lerer, BuzzFeed’s Executive Chairman.

BuzzFeed’s editorial team will expand and become three divisions to make clear the depth and diversity of its news, service, and web culture teams, and to create a structure for further growth. BuzzFeed News will include everything from breaking news to a foreign desk, whose team of staff correspondents around the world will double. BuzzFeed Life, the site’s incredibly successful service journalism team which will triple with the expansion, is focused on helping people live their lives around DIY, Food and Style. BuzzFeed Life will launch a test kitchen and food lab in Manhattan to create more original lifestyle content. BuzzTeam will continue to be ambitiously creative and entertaining while writing about and creating web culture. All editorial teams will report into Ben Smith, Editor-in-Chief.

The company will launch a new distributed division creating “BuzzFeed, off BuzzFeed” led by Summer Anne Burton that will scale BuzzFeed’s deep understanding of the social web and why people share across other platforms. Burton will build a team of twenty staffers who will make original content solely for platforms like Tumblr, Imgur, Instagram, Snapchat, Vine and messaging apps.

BuzzFeed is centralizing its branded content offerings for advertisers in a new unit, BuzzFeed Creative. The team of 60 creatives, led by Melissa Rosenthal, and 15 branded video producers, led by Matt Baxter in LA, will continue to expand under Greg Coleman as the company rolls out new ad products and as as social advertising becomes an essential part of every brand’s marketing strategy.

BuzzFeed will rapidly ramp up its international presence, launching BuzzFeed in Mumbai, Mexico City, Berlin and Tokyo this year, led by Scott Lamb, VP of International.

BuzzFeed’s new organizational structure allows the company to expand by incubating and acquiring new companies. Today’s reorganization is the start of an ongoing plan to grow horizontally by adding entrepreneurial new units to continue expansion beyond Motion Pictures, Distributed, Creative, and International.

The company also announced today that it completed a Series E financing of $50M from Andreesen Horowitz and that Kenneth Lerer, a co-founder of the company, will assume the role of Executive Chairman and advisor and work closely with Jonah Peretti on company strategy. Chris Dixon, general partner at Andreesen Horowitz, will join the Board of Directors and bring expertise and guidance in the technology space.

“We’re in the midst of a historic shift in the media industry where news is increasingly being distributed on social networks and consumed on mobile devices — we believe BuzzFeed can emerge from this shift as a preeminent media company. As an early investor in BuzzFeed, I’ve seen first-hand how technology is at the core of the BuzzFeed business and culture and permeates every organizational function, allowing them to lead in this social and mobile dominant age,” said Chris Dixon, general partner at Andreessen Horowitz, who led the investment for the firm.