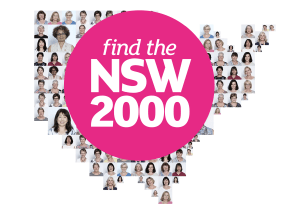 303 MullenLowe is using location data to shake women out of apathy and convince them to get a mammogram, in a new campaign for BreastScreen NSW.

The 'Find the NSW 2000' campaign is based around the statistic that more than 2000 women in NSW aged between 50-74 have breast cancer and don't know it, because they haven't had a mammogram.

303 MullenLowe CEO Nick Cleaver says women tend to have an “optimism bias” when it comes to breast cancer, which led to the agency taking a PR and digital approach to be more hard hitting and personal.

“Even though there has been and is a large amount of coverage regarding the importance of women having a regular mammogram, the facts are that just about half of all woman over 50 don’t. There are several reasons for this but the major one is the overriding belief that, 'It won’t happen to me',” Cleaver says.

“Our campaign idea planted a thought, which we found through research resonated with people: this idea that there are people out there who have breast cancer and don’t know it.

“In fact, we can tell you how many of those women reside in your suburb. By being able to be so specific and local, it made the message ever more compelling and difficult to ignore.”

The campaign will target communities in 10 regions in order to push more women out of apathy and increase the numbers of women getting screened.

303 MullenLowe was appointed to the Cancer Institute NSW account earlier this year, and the 'Find the NSW 2000' campaign is its first work for the group.

The agency, which rebranded earlier this year, has also been boosting its specialisation in digital and data.

“We feel this approach would be immensely effective because we are able to be specific about the alarming number of women that have breast cancer but don't know it,” Cleaver says. “We're able to set a target, activate a movement and normalise the behaviour of breast screening.”