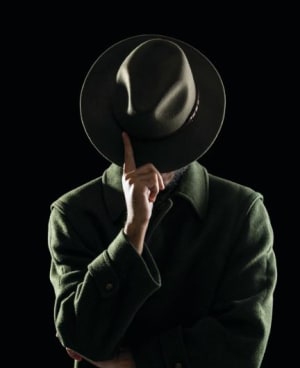 This first appeared in the AdNews July Magazine

Under cover of anonymity, a former agency CD–turned-freelancer reveals the bullshit, politics and obstacles that creatives deal with in this new series of raconteurs bending the ear of AdNews.

The best thing about leaving the full-time creative agency game is ...?

Escaping the bullshit, and the opportunity to work with a greater variety of people and projects.

Why did you leave and go it alone?

I initially got into this business because I didn’t fit into the square and now unfortunately this business has become the square. At least freelance allows me some control around where and when I work (touch wood). I also figured that if agencies wanted me to spend weekends and late nights away from my family they should pay for it.

Typical agency politics that got you down or got in your way?
In sport, great players rarely make great coaches and the same applies to creatives. The people who land and stay in the top creative jobs tend to be better managers than creatives and that usually requires playing the game and politicking. Skills that are unfortunately foreign to me.

Who holds the power in the creative agencies?

In the best agencies it’s always the ECD. It’s no coincidence that the top agencies in the world have always been the most creative, be it Wieden, Goodby, BBH, Droga, and in this region BBDO. As far as I’m concerned, everyone involved is there for one reason only and that’s to facilitate great work.

Indie creative agencies vs network shops. Which do you prefer and why?

No question, it’s indie. The networks are now timesheet factories run by traffic wardens and accountants.

Is the common gripe about big ad networks being slow to deliver work true?

Of course it is. Slow to deliver on everything except invoices.

What's the dirtiest (or sneakiest) thing you've seen done to win a pitch?

I’ve had people try and fish for info from a place I’m freelancing at about a pitch they’re competing on. If it’s a mate I’ll usually just laugh it off and if it’s not, I’ll just tell them to fuck off. Play hard but play fair.

Do you miss the culture of working in a team full–time?

I miss the journey a full–time team can go on with a client, building trust and evolving the work. From a social point of view though, not really. So–called culture today often feels a bit contrived and besides, it’s a younger person’s game.

How do agencies treat freelancers? Does this differ to when you were full–time?

Like suppliers for the most part. There’s less expectation and desire from agencies for freelancers to fight for their ideas or offer opinions anymore. When full–time, those battles often led to better work and in the end, happier clients. 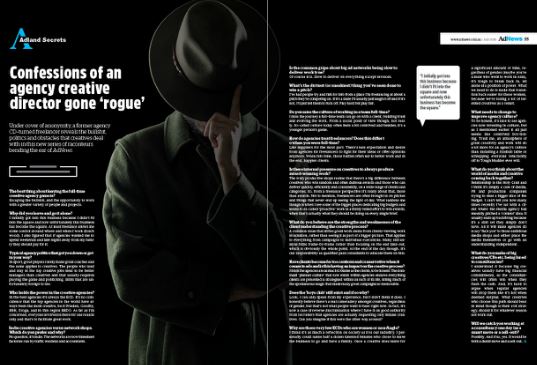 Is there internal pressure on creatives to always produce award–winning work?

The truly productive shops realise that there’s a big difference between creatives who win random and often dubious awards and those who can deliver quickly, efficiently and consistently, on a wide range of clients and categories. So, from a freelance perspective it’s really about that, more than awards. Not to mention, freelancers are often brought in on pitches and things that never end up seeing the light of day. What saddens me though is when I see some of the bigger places dedicating big budgets and teams to so–called ‘proactive’ work in a thinly veiled effort to win awards, when that’s actually what they should be doing on every single brief.

What do you believe are the strengths and weaknesses of the client understanding the creative process?

A common issue that stifles great work stems from clients viewing work in isolation, rather than seeing it as part of a bigger picture. That applies to everything from campaigns to individual executions. Many still analyse films frame–by–frame rather than focusing on the end take–out, which is obviously the whole point. At the end of the day though, it’s our responsibility as qualified paid consultants to educate them on this.

Have clients become far too cautious and conservative when it comes to ads and is this having an impact on the creative process?

I think the agencies are as much to blame as the clients, to be honest. The dominant ‘planner culture’ that now exists within agencies ensures everything clients are presented is strategised within an inch of its life, killing much of the spontaneous magic that made many great campaigns so memorable.

Does the 'boys club' still exist and if so why?

Look, I can only speak from my experience, but I don’t think it does. I honestly believe there’s a real camaraderie amongst creatives, regardless of gender, but that’s not what people want to hear right now. In fact, it’s now a case of reverse discrimination where I have it on good authority from recruiters that agencies are actually requesting only female creatives. Can you imagine if this were the other way around?

Why are there very few ECDs who are women or non-Anglo?

I think it’s as much a reflection on society as it is our industry. I personally could name half a dozen talented females who chose to leave the business to go and have a family. Once a creative does leave for a significant amount of time, regardless of gender (maybe you’re a male who went to work in Asia), it’s tough to break back in, let alone at a position of power. What we need to do is make that transition back easier for these women, because we’re losing a lot of talented creatives as a result.

What needs to change to improve agency culture?

To be honest, it’s nice to see agencies now investing in culture, but as I mentioned earlier it all just seems like contrived box–ticking. Trust me, an atmosphere of great creativity and work will do a lot more for an agency's culture than installing a foosball table or schlepping everyone reluctantly off to Tough Mudder ever will.

What do you think about the world of media and creative coming back together?

Relationship is the Holy Grail and I think it’s simply a case of media, PR and production companies trying to steal a bigger slice of the budget. I can’t tell you how many times recently I’ve sat with a client where the media agency has sneakily pitched a ‘content’ idea. It usually ends up backfiring because it’s a skill set they simply don’t have. All it will make agencies do is say "fuck you" to those ambitious media shops and either place the media themselves or go with an understanding independent.

What do you make of big creatives/CDs being lured to consultancies?

I understand it because big creatives usually have big financial commitments, so the consultancies will often win when they flash the cash. And, it’s hard to argue when regular agencies will drop them like it’s hot when deemed surplus. What creatives who choose this path should bear in mind though is their exit strategy, should it for whatever reason not work out.

Will we catch you working at a consultancy one day (as a smart move or a sell–out)?

Possibly. And if so, yes. It would be both a dumb move and a sell–out.