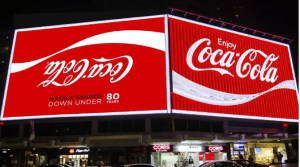 Coca-Cola Australia has launched a new local campaign to celebrate 80 years of Coca-Cola being made in Australia and to break the long-held myth that it's made in the US.

As part of the multimillion-dollar campaign, the iconic King Cross billboard will be flipped upside down in a nod to the company's local heritage Down Under.

A TV commercial, from McCann, has also been revealed which highlights Coca-Cola's long history in Australia.

The spot returns to Coca-Cola's roots opening at the year 1938, when the first Australian made bottle of Coke rolled off the production lines in Waterloo, NSW.

The ad follows Coke's timeline in Australia traveling through music festivals in the 70s and hot summers days in the 80s to arrive in the present time.

“By telling an emotive brand story full of relatable moments throughout Australia’s history, we aim to trigger the positive memories that people associate with Coke and our other iconic brands,” Coca-­Cola South Pacific marketing director Lucie Austin says.

The TV ad will premiere at this this Saturday’s AFL Grand Final. It will also feature in spots during in the NRL Grand Final and will continue to air throughout October.

Other campaign elements include social media interaction, which will focus on highlighting real Coca-Cola stories from everyday Australians who have been a part of the brand’s 80-year journey to date.