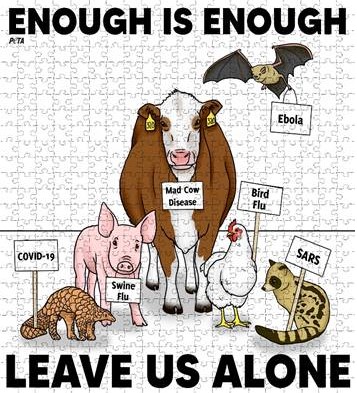 After Prime Minister Scott Morrison said that jigsaw puzzles are "essential" items during the COVID-19 lockdown, giving the public permission to leave home to buy them, animal rights group People for the Ethical Treatment of Animals (PETA) has sent a customised jigsaw puzzle to his office with an important message to help him piece together the best way to avoid future pandemics.

The 500-piece puzzle depicts a bat, a pangolin, a pig, a cow, a chicken, and a civet, each holding a sign with the name of a disease that passed from that species to humans as a result of animal exploitation.

The tagline proclaims, "Enough Is Enough – Leave Us Alone."

The US Centers for Disease Control and Prevention estimates that 75% of recently emerged infectious diseases in humans began in animals.

In a paper published in 2018, Belgian spatial epidemiologist Marius Gilbert found that more "conversion events" for bird flu – in which a not-very-pathogenic strain of the virus becomes more dangerous – had occurred in Australia than in China.

"Zoonotic diseases aren't limited to a single country or to wet markets – wherever animals are bred, intensively confined, and slaughtered, humans run the risk of creating another pandemic," writes PETA's Emily Rice in a letter to Morrison accompanying the jigsaw puzzle.

"As the world faces unprecedented losses of many kinds because of COVID-19, we remind you that how to make the world a kinder, greener, healthier place is a puzzle that's easily solved. … [O]ur fetish for flesh is killing us, and a world without animal exploitation must become the new normal."

The letter also highlights the economic impact of disease outbreaks caused by exploiting animals for food: "The Australian government often claims that animal agriculture is vital to employment and the wider economy. Yet the economic defence for slaughtering over half a billion defenceless animals for human consumption each year now holds even less weight when you consider that an estimated 1 million Australian jobs are likely to be lost because of the COVID-19 pandemic and that the crisis may strip US$2.7 trillion from the global economy."