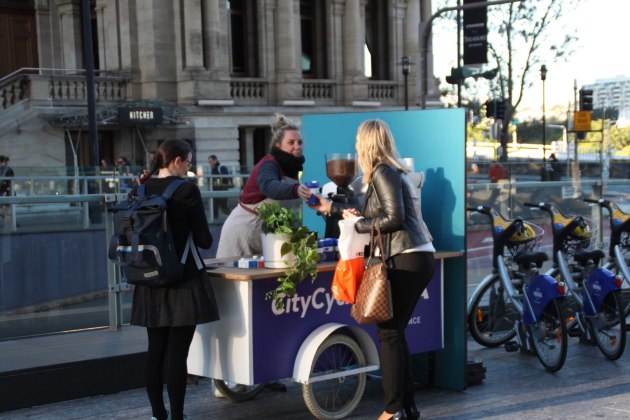 NRMA Insurance has been named the new partner of Brisbane CityCycle, seeing the bikes change to a blue colour scheme.

JCDecaux’s Brisbane CityCycle bicycles has kicked off a new partnership with NRMA Insurance and unveiled a new blue colour scheme.

To celebrate the new-look, JCDecaux hosted an event for commuters at Brisbane’s Reddacliff Place on 15 July offering free coffee and NRMA branded cupcakes for the public.

“We know that people choose different ways to move about the city, so we’re helping the people of Brisbane do this safely as they use the CityCycles to get from A to B each day.”

Brisbane has operated a shared bike scheme since 2010, introduced by JCDecaux, which has seen close to 3.5 million trips taken since its inception, rising since the introduction of "tap and go" technology at 150 bike stations.

More than $27 million has been committed by the Queensland Government to bolster Brisbane’s bikeways, including key cycling links in Indooroopilly, Lutwyche, Nudgee, Wakerley, Wishart and the CBD.

“JCDecaux is renowned globally for its advertising funded bike schemes, which have been acclaimed for easing traffic congestion, reducing emissions, with obvious health benefits to users, as well as being an environmentally friendly, cost effective way to get around cities," JCDecaux CEO Steve O’Connor says.

“CityCycle has been embraced by residents, providing a more environmentally sustainable alternative to transport in and around the city, especially as urban populations and apartment dwellers grow. We are delighted that NRMA Insurance has agreed to sponsor the bike scheme and introduce a new, modern colour scheme.”