Hyundai takes to the air with Surfing Australia and Innocean 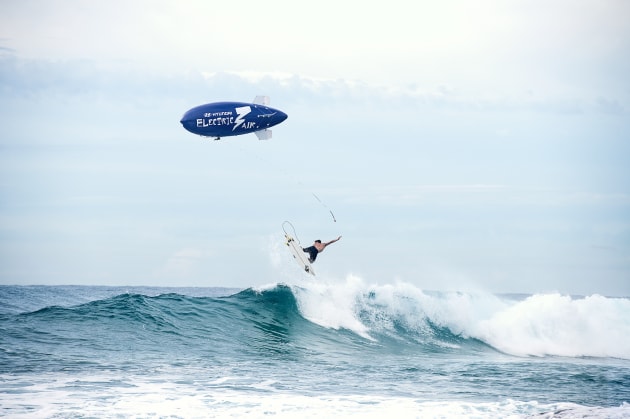 The Hyundai Electric Air Exhibition saw a branded blimp hover above a line-up of surfers in Newcastle.

Aerial specialists from 24 of Australia’s best Boardriders Clubs took to the skies in front of packed crowds on Newcastle Main Beach – plus, a televised audience on Fox Sports, - in an attempt to win a Hyundai Kona Electric vehicle for a year.

The Hyundai Electric Air Exhibition, created in partnership with Innocean Australia and Surfing Australia, launched on May 15 and 16, as part of the 2021 Australian Boardriders Battle National Final in Newcastle - Australia's biggest grassroots surf event.

The Hyundai-branded blimp hovered above the line-up of surfers, dangling the key just out of reach of competitors during two exhibition time slots.

Not only did competitors have to perform an air with a clean landing, but they also had to grab the key mid-manoeuvre.

"By working closely with our trusted business partners for this project, we delivered an activation that’s uniquely innovative and dynamic in its approach - we couldn’t be more excited to have held this never-done-before exhibition and what better prize than the Hyundai Kona Electric?”

Innocean senior creative Damon Porter says: “To bring Hyundai’s partnership with Surfing Australia to life, we wanted to create something that was as much fun in the surf, as the Kona Electric is on the road. To have so many of the best aerialists from Australia having a crack and going for the key was a real highlight.”

Noosa Boardriders surfer Aaron Kelly says: “I haven’t done anything like that before. It’s a new format that’s so technically challenging with the wind and other variables. To try and grab the key, I eyed it off, raced down the line and jumped at it.”

Kira Mobberly from Surfing Australia’s partnership team says: “We run a lot of competitions up and down the coast and we’ve never done anything quite like this. It’s unique for us, and a lot of people within the surf industry have been shocked to see something as crazy as this when they rock up to the beach. It’s been awesome to launch the Electric Air Exhibition at the Boardriders Battle Final.”

The Kona Electric will remain up for grabs until a surfer successfully lands the keys and the air.