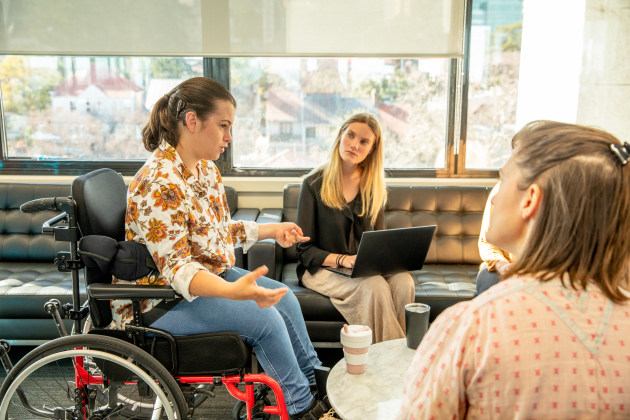 The new images will be added to the This is Australia collection to portray the Australian population more authentically.

Getty Images and Canon Australia have teamed up with not-for-profit organisation Starting with Julius to co-create imagery that authentically represents Australian people with disability.

Starting with Julius is a a not-for-profit organisation committed to changing the way disability is represented in media and marketing.

The collaboration includes the creation of imagery that more accurately portrays individuals with disability and breaks stereotypes.

A call for contributors to the collection was distributed exclusively to Canon Australia’s local consumer base, after which photographers took part in an open session with Getty Images and Starting With Julius, followed by a full day photoshoot.

The resulting images are being added to the existing This Is Australia collection, which was launched almost a year ago with the intention of portraying the Australian population more authentically.

In the past year, Getty Images has seen an increase in searches for disability-related images on its website.

The term “disabled adult” increased 79% year on year. Additionally, searches for "developmental disability" was up 77%, "happy disabled" increased 93%, and "disability employment" was up 83%.

In 2018, Getty Images launched a partnership with Verizon Media and the National Disability Leadership Alliance (NDLA) on The Disability Collection.

The partnership included developing a comprehensive set of guidelines on how to authentically reflect people with disabilities in photography, which guided the work in Australia.

“Images have a profound impact on the way we view the society we live in, and should represent the full breadth of demographics, belief systems and ways of life," O’Halloran says.

"When one in five Australians experience disability, it shouldn’t be rare for advertising and marketing to include them. We believe it’s a brand’s responsibility to encourage greater diversity and authenticity – so we are taking steps to do so.

“The collection intentionally depicts people with disabilities in the full spectrum of human experiences that make up daily life; includes a diverse range of socioeconomic status, age, gender, ethnicity, and sexuality; and portrays real people, rather than actors portraying disability. Importantly, it also was designed to avoid only representing the stereotypical narrative of 'overcoming' disability and instead accurately pictures disability as one aspect of a person’s identity.

“Starting With Julius’ commitment to the equal representation of people with disability in advertising and media makes them an ideal partner to co-create this content with.

"Each stock model came through its network. Alongside Starting With Julius, this collection gave us a platform to educate our contributors around how to work with people with disability, including the appropriate language to use and general content creation guidance.”

Angel Dixon, advocacy manager for Starting With Julius says the misrepresentation of people with disability in stock images and the negative language used in image captions and tags has been a problem for a long time.

“Stock images can be downloaded an infinite amount of times and images are used across advertising, websites and applications, social media, TV and film, presentations, newspapers, magazines, books, and so much more," Dixon says.

"Stock images are used to help brands and organisations tell stories, which means stock imagery has the power to change the way stories are told.

“Getty Images is leading the way in filling the gaps and revolutionising stock imagery when it comes to images of people with disability. From its #ShowUs project to the ‘This Is Australia’ collection, it is clear that Getty Images is committed to the pursuit of more inclusive imagery across the board. Starting With Julius was excited to be partnered with Getty Images and Canon on this project."

“Our partnership with Getty Images and Starting With Julius gives Canon camera owners the opportunity to contribute to imagery in the Australian media and advertising industry," McLean says.

"We’re proud to give Canon camera owners a platform to build their skills and be part of the shift to more authentic representations of Australia and Australians.”