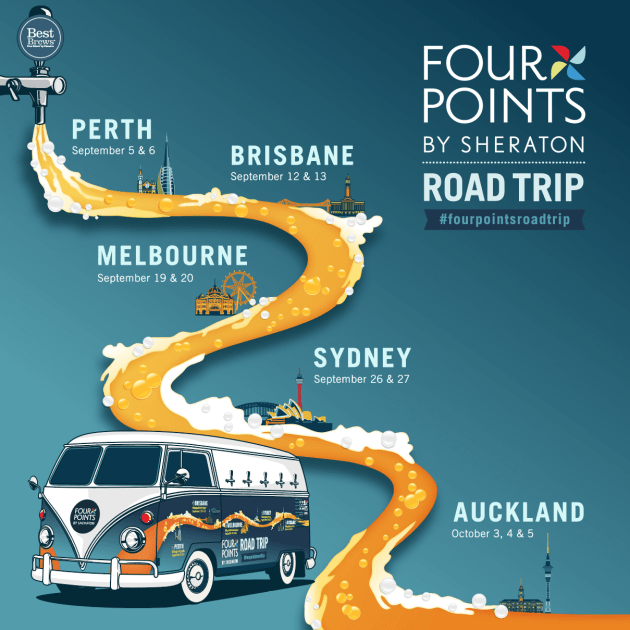 A branded kombi will travel across Australia and New Zealand serving craft beer during September and October.

Four Points by Sheraton has launched of The Four Points Road Trip, a craft beer journey across Australia and New Zealand celebrating the brand’s Best Brews program and commitment to bringing travellers and locals together over the perfect pint.

Activity in Australia and New Zealand is launching in time for Oktoberfest in the form of a road trip.

It will see a branded kombi van specially fitted with craft beer kegs and taps travel to Perth, Brisbane, Melbourne, Sydney and Auckland throughout September and October.

Each stop on the road trip is home to a Four Points hotel and will host the kombi for two days, all open to the public.

At the pop-up events, locals and visitors alike will be able to taste free craft beers from local and national Four Points Best Brews partner breweries.

Guests who attend the activation will also have the opportunity to meet local brewers, take and share photos for a social media competition to win a trip to Auckland, and more.

“Approachability, comfort and genuine, welcoming service are intrinsic to the Four Points brand, and offerings like The Four Points Road Trip, that bring guests and locals together over craft beer embody this. We’re excited to bring this to life throughout Australia and New Zealand. Road trips are a quintessential travel experience in both countries, and The Four Points Road Trip will certainly be a unique way of connecting travellers and locals and celebrating craft beer.”

The Four Points kombi will be parked in the neighbourhood of each Four Points hotel, at various dates and times throughout September and October.

The first stop will be Perth, with the kombi stopping at Elizabeth Quay between 4pm and 8pm on Thursday 5 and Friday 6 September.

Brisbane, Melbourne, Sydney and Auckland locations to be revealed.

Four Points by Sheraton will be continuing the festivities throughout The Four Points Road Trip, with a special food and drink offer available to kombi visitors at each of its hotels throughout Australia and New Zealand – four wings for $1 with every beer purchased, each day throughout September and October.

A social media competition will also be running to win a trip to Auckland.

The post must tag Four Points and use the hashtag #FourPointsRoadTrip.

The Best Brews program sees each Four Points hotel around the world offer local craft beers on tap, allowing guests the chance to sample the authentic flavours of their destination.

In Australia and New Zealand, this looks like Mountain Goat on tap at Four Points by Sheraton Melbourne, and Ravishing Rey Rye served at Four Points Brisbane.