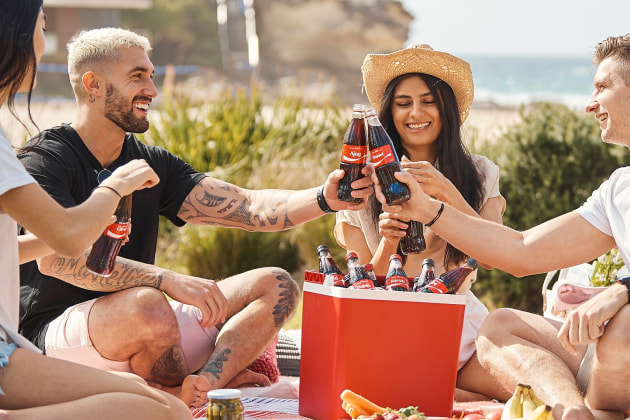 The names range from Shane, Tom, Emily and Sarah to Ajay, Hassan, Zhang and Paolo and even Caitlin, Katelyn, Caitlyn and Kaitlyn.

Australians will be able to Share a Coke with all their friends and family this summer, with Coca-Cola set to release hundreds of its iconic bottles and cans featuring popular and diverse names that represent modern Australia.

For the first time, Aussies can go online at shareacoke.coca-cola.com.au to personalise a limited-edition glass bottle of Coke with their own name on it or order one for a mate or loved one.

Australians can share a Coke with friends and family straight off the shelf by choosing from hundreds of popular names available in retail outlets around the country.

To showcase the diversity of Australia in 2019 the names range from Shane, Tom, Emily and Sarah to Ajay, Hassan, Zhang and Paolo.

“Coke has a proud history of championing inclusivity and we are thrilled that the hundreds of names we are releasing this summer reflect the wonderful diversity of Australia in 2019," says Vamsi Mohan Thati, president of Coca-Cola Australia.

"We want to give all Aussies the chance of joining in the fun and sharing a Coke this summer.”

Popular nicknames such as ‘Old mate’, ‘Champ’ and ‘Legend’ will also be featured on cans of Coke this summer. Aussies will also be able to share a Coke with their ‘Bro’, ‘Sis’, ‘Princess’ and ‘BFF’ or even ‘The gals’ and ‘The boys’.

Aussies with unusual names or nicknames or for anyone who likes to shorten names can create their very own personalised bottle via the Share a Coke website.

So whether it’s for a son called ‘Bort’, a mate called ‘Thomo’ or because Liz is actually short for ‘Lizard’, Coca-Cola fans will be able to celebrate the special people in their lives by sharing a Coke.

Coke will release multiple spellings for many popular names in a nod to Australia’s fondness for unusual spellings.

So fear not Caitlin, Katelyn, Caitlyn, Kaitlyn and Kath, Kathy or Cathy – there’s a Share A Coke for you!

The same goes for Isabel, Isabelle and Issy or Jon, Jonathan and Jono.

Families can also join in the fun with 1,000 surnames such as Smith, Williams, Nguyen and Zhou available on 1.25L bottles.

Coke is also hitting the road over summer to bring Share a Coke pop-up kiosks to selected malls and shopping centres around the country.

Two free 250ml cans of Coke will be on offer at the special pop-ups in either Coca-Cola Classic or No Sugar.

The world-famous Share a Coke campaign was first launched in Australia in 2011 and was met with an overwhelming response from Australians who embraced sharing personalised Cokes as gifts.

It has since been rolled out in more than 70 countries around the world including China, France, Canada and the US and this year is the first time it has returned to Australia.