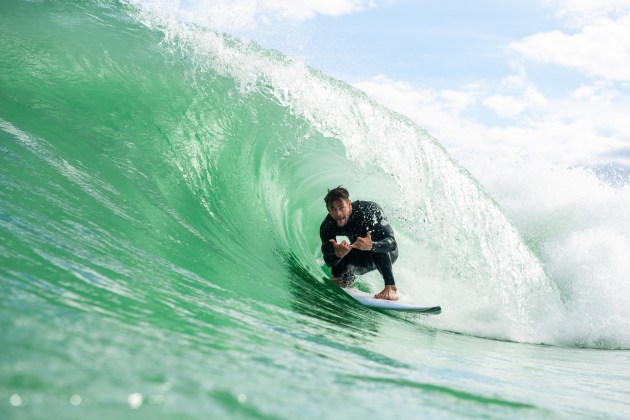 Australia’s highly anticipated first surf park, URBNSURF Melbourne, has hit fever pitch in the last few weeks as it showcased its waves in action for the first time in its two-hectare surfing lagoon located just minutes from Melbourne Airport.

A celebrity drop-in by none other than Thor himself, Chris Hemsworth, also propelled the launch campaign to global eyeballs.

Content has been rolled out across URBNSURF’s own channels, dialling up the menu of waves that will be available to the public from Summer 2020 when the surf park officially opens.

Out-of-home media has also gone live around Melbourne Airport and M2/Citylink thanks to oOh! Media.

Richard Chapman, CEO of Bastion Effect, says the interest and engagement in URBNSURF meant this epic milestone for the park was deserving of a celebration.

“We’re beyond excited to be partnering with URBNSURF and its been an incredibly rewarding experience to be able to work with the team to launch and showcase the waves pumping in Tullamarine,” Chapman says.

“Having surfing royalty such as Julian Wilson, Sally Fitzgibbons and 2x World Champion Tyler Wright, as well as the young, up and coming stars of Australian surfing, has meant our First Waves launch has taken off and we’re absolutely pumped for what’s ahead for the surf park in 2020."

A venture more than seven years in the making, URBNSURF brand and marketing manager Rupert Partridge is proud that URBNSURF Melbourne will be a safe, convenient and inclusive place to ride waves for surfers of all ages and abilities.

“We’re stoked to have the first perfect waves pumping out in Tullamarine, and are excited to welcome Melburnians, Victorians, and visitors from Australia and around the world to surf, eat, train, shop and experience surf culture at Australia’s first surf park this Summer,” Partridge says.

“Having the support of talented agency partners such as Bastion Effect and SouthSouthWest has been fundamental in bringing the brand to life and launching URBNSURF on the world stage. With their assistance, we’re excited to become a new hub for the Victorian surf community, and a must-visit destination in Melbourne for locals and tourists alike."

Shaped like a baseball diamond, URBNSURF Melbourne’s two-hectare surfing lagoon - similar in size to the MCG - offers both left and right breaks.

Capable of accommodating surfers of all ages and abilities simultaneously across surfing zones, the innovative sports and leisure venue will be open day and night, year-round.