AKQA creates Hall of Distractions for Levi's and Google collaboration 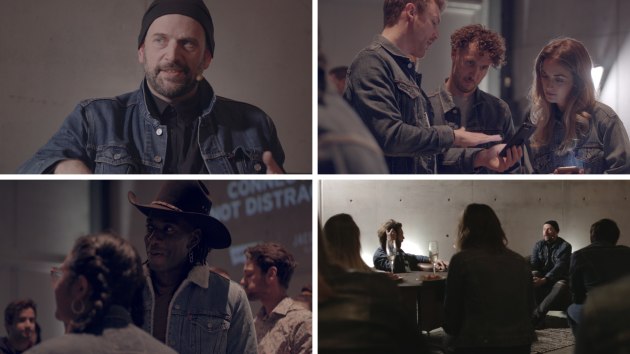 The Levi’s Trucker Jacket with Jacquard by Google has tech built into the fabric to keep wearers connected while they're on the go.

AKQA has created a large-scale immersive experience ‘The Hall of Distractions’ to accompany the launch of Levi’s Trucker Jacket with Jacquard by Google at Carriageworks.

In the experience audiences were confronted with one year of a smartphone user’s notifications, condensed into a 30-minute cacophony of sound and light.

“We created the Hall of Distractions in an attempt to help people understand the scale at which screens and algorithms have gained command over our lives,” AKQA APAC executive creative director Tim Devine says.

“The average user spends 56 days of the year on their phone – and that’s not without cost, we pay for it with the dreams we never pursue.

“That’s what makes products like Levi’s Jacquard by Google so important. It gives us a new interface through which we can use technology, and gives us back the attention we’d rather be placing on our own lives.”

The Levi’s Trucker Jacket with Jacquard by Google is a revolutionary product that seamlessly merges Levi’s iconic style with the technology of Google to enhance wearers’ experience of their world.

The tech is built into the fabric, providing an ever-expanding toolkit of abilities, accessible by simple gestures to keep wearers connected while they’re on the go.

Levi’s VP of global product innovation Paul Dillinger says while the attention economy is thriving, it is pulling society away from what they would rather connect with. With technology though, it can change.

“We’re excited to continue this journey with our partners at Google ATAP,” Dillinger says.

“Two years after we first launched Jacquard - the technology has become smaller and more discrete, more affordable and more useful … but the premise and purpose remain the same: you can keep your phone in your pocket and your eyes on the world around you, staying connected without being distracted.”

Levi's ANZ managing director, Paul Sweet, says the release of the Levi's Trucker Jacket with Jacquard by Google was more than just a product launch.

“Levi’s has always put a premium on clothes that stand the test of time," Sweet says.

"And with the Levi’s Trucker Jacket with Jacquard by Google, longevity comes by way of both durability, and the more human way in which it uses technology to align with the wearer’s own goals.”