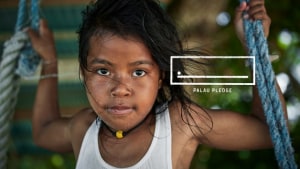 The incredible story of how four women set up to stop the force of tourism on Micronesian Island, Palau, and in the process, and in partnership with Host/Havas, impacted immigration policy and earned top honours at Cannes Lions.

Tourism is a necessary evil for small communities and nations around the world, bringing millions of dollars into the economy but often destroying the environment in the process.

In Palau, a Micronesian nation located in the western Pacific Ocean, tourism was becoming an escalating issue, with 160,000 visitors flocking to the island each year. They were polluting the area, damaging its coral reefs and poaching tropical wildlife.

With a population of just 20,000, Palau's small infrastructure couldn’t withstand the incoming tourists. Enter The Palau Pledge (see below), which is stamped into tourists' passports. Visitors are also required to sign an agreement not to damage or exploit the natural resources.

The idea was the brainchild of Laura Clarke, and three other marketers and Palau residents, including Nanae Singeo, Jennifer Koskelin-Gibbons and Nicolle Fagan, who realised something had to be done to protect the ancient culture..

With a background in marketing and PR, the four women set out to save the island from the burgeoning threat of tourism.

In the process, they created - in partnership with Host/Havas - an initiative that is changing immigration policy and go on to win three Grand Prix at Cannes Lions, including the coveted Titanium title. It also took out the sought-after Black Pencil at D&AD, as well as a slate of other gongs at global and local award shows this year.

The initiative has been backed by activists and celebrities, from Leonardo DiCaprio to The Rolling Stones, and recently received $60,000 in funding from the Australian Government to back the next stage in its development.

It has also put recently merged Host/Havas on the map and helped them take out Agency of the Year at AWARD Award this year.

Host/Havas ECD Seamus Higgins said winning the D&AD Black Pencil was a career milestone, having had the award as his computer screensaver for the last 10 years. But beyond winning metal, the creative said he is most proud of the positive environmental impact The Palau Pledge has driven.

“The awards are amazing and it’s the industries way of recognising the quality of our work, but the real opportunity is to work on a brief that makes a genuine difference,” Higgins said.

“All the problems The Palau Pledge addresses are critical to the survival of future generations of Palau and we can see, at least anecdotally, we are really shifting behaviours.”

Host/Havas knew the vow had to be powerful to attract attention, especially with no media budget to fall back on if its PR strategy didn’t cut through.

This is why the pledge - poetic and powerful in its simplicity - was written by and addressed to the children of Palau.

“We knew we had an idea that would resonate around the world because the whole world is facing issues of sustainability, from Iceland to the States, to Australia’s very own Great Barrier Reef. Everywhere is suffering from unsustainable tourism practices,” Higgins said.

“We knew if we could solve this for Palau, it would have broader ramifications for the rest of the world and if we got the idea right, we didn’t need a media budget. That’s the power of a huge idea versus a huge media budget.”

A pro bono project, The Palau Pledge had many components, from the physical stamp, to the political process of changing immigration policy, to an inflight film that informs travellers of the pledge, as well as posters and signs placed around the island and in airports.

“The Palau Pledge let us turn a passport into a new media channel, driven by influencers and social media,” Higgins says.

“We weren’t able to use traditional channels to tell our story so we invented new ways.

“That’s what’s exciting about advertising now. We’re not bound by anything but our imaginations.

Clarke said the initiative is “revolutionising the tourism industry” and said so far, it has a 100% success rate, with no one refusing to sign. Soon, she hopes each incoming tourist will agree to sign the agreement.

“The whole country has been galvanised by this campaign,” Clarke said.

“One of the biggest things we’ve seen is that it has also shone an international light on challenges that the Pacific Island children are facing.

“What Host/Havas has done is given the Palau children a voice to stand up against the trash, pollution and climate change.”

I take this Pledge,

To preserve and protect your beautiful and unique island home.

I vow to tread lightly, act kindly, and explore mindfully.

I shall not take what is not given.

I shall not harm what does not harm me.